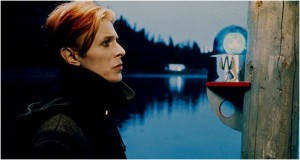 “The Man Who Fell To Earth, ” Nic Roeg’s 1976 pop-culture satire and able brainteaser is ever more a thing of beauty, slipping effortlessly from the moorings of its era. For its thirty-fifth anniversary, there’s a new 35mm print of the original European version, which runs about twenty minutes longer, including more dissatisfied kink. It’s a daring post-Watergate clash of Chester Gould and Thomas Pynchon: the mid-to-late twentieth century as an electric, hallucinogenic free-association free-for-all of desert industrial landscapes and groaning city streets, of youth-like lust and bizarre government conspiracies. David Bowie comes from the sky as one Thomas Jerome Newton, raking yellow-to-orange forelock from his mismatched eyes, bearing odd trinkets and nine inventions that transform the nation, going against the titans “Eastman Kodak, Dupont and RCA”: instant photography among them, Newton accelerates a consumerist country’s itch for thrills with his “World Enterprises” and accumulates hundreds of millions of dollars as an increasingly “alienated” industrialist. A Bruegel painting of Icarus, accompanied by W. H. Auden’s “Musee des Beaux Arts,” is invoked bluntly and aptly: “But for him it was not an important failure; the sun shone/ As it had to on the white legs disappearing into the green/ Water; and the expensive delicate ship that must have seen/ Something amazing, a boy falling out of the sky,/ had somewhere to get to and sailed calmly on.” Roeg, a time-slipping editor who began as a cinematographer, knows red from blue, red sand from blue sky from green water from red blood, knows the difference between Bowie’s milk torso and Rip Torn’s fishbelly-white gut. The southwest is pinioned against Manhattan of that moment, and Roeg gets more from his juxtapositions than say, Terrence Malick in “The Tree of Life.” But they’re both editors who work with both abstraction and the very concrete: objects and glances and reactions are given light-and-death weight. Every bit’s abstract and so very concrete. Objects like white telephone handsets and multi-pane mirrors anchor glances and reaction shots. There are echoes of then-fresh color still photographers like Stephen Shore and William Eggleston, with Shore’s blank stares at common color and Eggleston’s awestruck glances at the essential character of banal juxtapositions within the frame, but Roeg and cinematographer Anthony Richmond are fleet, liquid, never to be pinned down. As a chemist who comes into Newton’s orbit, Rip Torn is randy rot; Candy Clark, a motel maid-turned-helpmeet, is hapless mothering itself. With Buck Henry. 139m. (Ray Pride)

“The Man Who Fell To Earth” opens Friday at the Music Box.