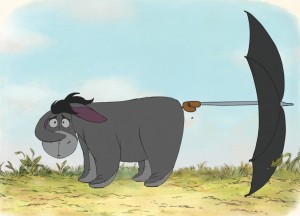 This lovely fare for the read-to-me set teaches a life lesson: illiteracy can lead you to needless fear, yet crafty arranging of the letters of the alphabet can build a ladder to freedom for your pals in peril. Walt Disney Animation Studios preserves the interplay between screen and storybook page found in 1977’s “The Many Adventures of Winnie the Pooh,” where the narrator intervened at one point to wake up the title’s dozing bear, a small-brainer with an endearing oral fixation on honey. This time the narrator (John Cleese) tilts the page to slide slumbering Winnie along the edges of paragraphs. One of the toy animals belonging to the boy Christopher Robin, whose misspelled and misread note triggers the plot, will ask what happens next. “If I told you that, I’d ruin the rest of the story, wouldn’t I?” chides the storyteller. Also reprised is the gentle hand-drawn style of animation. Instead of three episodes that comprised the earlier seventy-four-minute film, this fifty-four-minute morsel bears the heading “Chapter 1, In Which Winnie-the-Pooh Has a Very Important Thing to Do,” phrased in the manner of author A.A. Milne’s original chapters in 1926. Co-directors Stephen J. Anderson and Don Hall share story credit with six others. Tender ears will detect the quaint imprecation “Oh, bother” during the winsome adventures of Tigger, Owl, Rabbit, Piglet, Kanga, Roo and Eeyore. With tunes by Zooey Deschanel and the voices of Jim Cummings, Craig Ferguson, Tom Kenny, Travis Oates, Bud Luckey. 74m. (Bill Stamets)