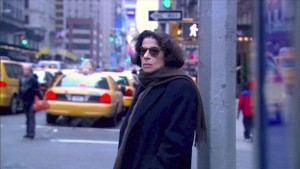 Fran Lebowitz has been around the block.

The writer’s block, famously. Still not yet the most constipated of talented Manhattan-centric writers—that dubious honor falls to Joseph Mitchell, the brilliant miniaturist who remained on staff at the New Yorker, doing daily rounds, taking notes, making genial small talk, years after he’d stopped producing—Lebowitz prides herself on her daily circuit of walking the island. She procrastinates, perambulates, percolates. And smokes. And coughs. And hacks. Her anecdotes are riddled with semi-colons, apostrophe, appositives, backstrokes, attenuated clauses. (Scorsese catches her in one story about attending a Nobel Prize dinner that turns into implausible nonsense; her grin grows as she works to extricate herself.) Lebowitz’s reputation rests largely on two tiny volumes, “Metropolitan Life” and “Social Studies,” sardonic, cynical collections of model-slim bursts of attitude. In “Public Speaking,” a worthy, quotable quickie from Martin Scorsese, she gargles her laugh that it’s something else, it’s “writer’s blockade… Very much like the Vietnam War. Didn’t know how I got into it, don’t know how to get out of it.”

In its brief yet somehow ideal eighty-four-minute running time, “Public Speaking” places Scorsese leaning back in a booth at the Waverly Inn, co-owned by co-producer and Vanity Fair editor Graydon Carter. The director’s only just barely in frame, eyebrows or horn rims quaking with empathetic mirth at the pronouncements of New York’s most successful non-publishing writer, and perhaps non-writing writer. It’s a step down from the street into Carter’s clubhouse, filled with his post-Algonquin roundtables, to meet our post-Dorothy Parker. Scorsese draws from a few evenings after hours in the empty restaurant: middle-of-the-night conversations are the source as well for Richard Schickel’s unsuccessful, mostly dreadful, self-regarding “Conversations With Scorsese.” (There’s talking and then there’s listening: Scorsese listens.)

There’s also an onstage exchange with Lebowitz’s friend Toni Morrison, a speaking engagement and black-and-white footage of other figures who were also outsiders in New York, Jewish, gay, or black—James Baldwin, Gore Vidal, Oscar Levant and Serge Gainsbourg, in an eccentric but ultimately haunting 1964 Scopitone music video, “New York, USA.” (The video was Lebowitz’s idea, but Scorsese runs with it into the end credits.) Scorsese notches our White Narcissus right up there with prime talker-artiste-outsiders. The approach is minimal, low budget, and the kind of high-yield, low-investment project that gains from the acumen of Scorsese, his crew, and especially his shooter, Ellen Kuras. Here’s hoping there are more small, shaggy-dog projects among the big ones, more “Italianamerican”s, “American Boy”s and “Public Speaking”s.

The 60-year-old professional conversationalist came to New York City at the end of the 1960s. Young, she mingled with Warhol and Co., claims she hasn’t done drugs or had a drink since she was 19, worked at Interview. “Andy kept using the word fame all the time, it was a joke,” she says. “Let me assure you, this was a joke. You take these drag queens who are actually criminals, because it’s against the law to wear a dress if you’re a man.” Her own uniform is as keen as drag or military issue: rolled-up pressed jeans, about an inch or so above a variety of kinds of brown boots, a man’s oversized pinstripe or glen plaid jacket over an overly long French-cuffed shirt, striped or white. In period footage, she’s indelibly young, whip-smart, the very same person getting away with something else altogether.

Her most affecting moments come when she rues the loss of that very era, a “loss not of artists, but of audiences when AIDS hit. Such a high level of connoisseurship of everything, that made the culture better.” She’s cold about how it happened. The first wave of people who died with AIDS, in “The first five minutes”? “They were the people who got laid a lot.” She shrugs. Holds her face. Scorsese holds the shot.

“This is what happens when an inside joke gets into the water supply,” she says of camp, sort of, it seems, in yet another rampage of condescension. Scorsese doesn’t denature Lebowitz’s aggravating rhythms: her dry-mouth lip smacking is annoying, always, and the insistent rapping of the cufflinks on the table clank clumsily throughout. Still, when she’s working the room, or at least, working the booth, and says things like, “Too much democracy in the culture, not enough democracy in the society—the culture should be made by a natural aristocracy of talent” or “At a certain point, the worst picture taken of you when you were 25 is better than the best picture taken of you when you’re 45,” at least a poisoned embrace is in order.

Is she right when she says a broken writer is “Punishing yourself for being god”? Or is she on the money saying, “I think I have tremendous resistance to authority even if it’s mine… I don’t like to brag, but let me put it this way, I am the waster of my time of my generation.” Carter says he wanted Wes Anderson to make the film, but it landed, appropriately, in Scorsese’s hell of a kitchen: Fran Lebowitz is Rupert Pupkin’s little sister, the Queen of In-Joke Comedy.