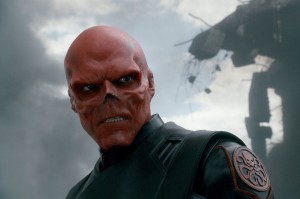 First unfurled in March 1941 by Timely Comics, Captain America goes from that ten-cent comic to the big screen in a summer action adventure built for ten-year-old boys. In 1943, Steve Rogers (Chris Evans) lies five times to recruiters before Dr. Abraham Erskine (Stanley Tucci), an Austrian scientist in exile in Brooklyn, reclassifies the asthmatic “4F” runt as “IA,” and recruits him into the Strategic Scientific Reserve for a “super-soldier” experiment. Steve is the sort of Brooklynite who gets beat up for chastising a jerk in a movie theater who heckles a patriotic newsreel. A massive injection of blue serum, followed by a blinding zap of Vita-Ray that taps half of Brooklyn’s electricity, “amplifies” Steve’s muscles, stature and righteousness. His homefront handlers brand him Captain America and put him on the road with show girls to hype war bonds. That explains the silly outfit he’s wearing when he  goes AWOL from a USO tour five miles from the front in Italy. He single-handedly liberates Allied POWS, including a Brooklyn pal, used as slave labor to assemble weapons of mass destruction. His occult nemesis is the rogue head of the “Nazi’s deep science division”: Johann Schmidt (Hugo Weaving), an earlier serum test subject, schemes to bomb Berlin, Boston, Chicago, New York and other targets, so he and his minions can trump Hitler and run the world. Joe Johnston (“Jumanji,” “The Wolfman”) ably directs a lively script by Christopher Markus and Stephen McFeely that suffers from art direction that looks like a throwback to a badly dated video game. “Captain America: The First Avenger,” a prequel to the upcoming “Marvel Studios’ The Avengers,” is a totally-botched foray into forties kitsch with zero irony about our wartimes. With Tommy Lee Jones, Hayley Atwell, Sebastian Stan, Dominic Cooper, Toby Jones, Neal McDonough, Derek Luke, Kenneth Choi. 124m. Reviewed in 3D. (Bill Stamets)