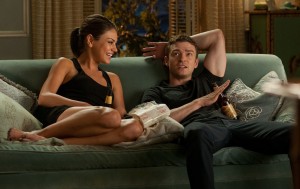 On one hand, the very funny and largely satisfying “Friends with Benefits” is yet another manic fantasy of a Manhattan media wonderland-cum-playground that never existed but in the movies, or maybe 1994. On the other, it’s an uncommonly fucky rom-com that whirls around the chemistry between co-stars Mila Kunis and Justin Timberlake. Jamie (Kunis) is an executive headhunter who fields an offer to Los Angeleno Internet guy Dylan (Timberlake) to become art director of GQ magazine (its logo emblazoned at the entrance of Rockefeller Center). Their rapport is breezy; both are reluctant to fall into bed for fear of falling into like. Vulgar, sassy zest ensues. (“Shut up, Katherine Heigl, you stupid liar!” is just the beginning.) I get in trouble when I call romantic comedies “smart,” but there’s spark and spirit and chemistry in their give-and-take, even once genre conventions kick in. Director Will Gluck and co-writers Harley Peyton, Keith Merryman and David A. Newman do yeoman work attempting to scale at least the base of the exampled precipice of Hawksian banter. There’s skin to boot: “Friends with Benefits” lavishes Kunis’ legs and brandishes Timberlake’s bottom, but also has the characters incorporate comic business into later joint recollections, such as Dylan recalling their introduction, as Kunis does a barefoot luggage-carousel tarantella at LaGuardia. In their several bedroom scenes, there are uncommonly intimate beats: the slightest of flinch from Dylan when Jamie kisses him after oral sex, blanching at the taste of himself; and a negotiation after an accidental intimacy that touches on the eye-opening idea of analingus. Woo-hoo! There’s something you never got from Hepburn and Tracy. But it all feels just right, even as the city glitters but seems of a different era. The barbs and bitchery are glib and snappy but the script’s as serious as they come about forming a vocabulary of togetherness, the line between like and really like, and how coupledom comes to be, much like the much-despised “Away We Go.” Kunis is always barelegged and often barefoot, and Timberlake dances around to the very edge of his character’s fear of being a little “emasculated” by small things. Kunis’ range of squonks and squeaks and purrs is music of an own eccentric joy. Warning: there are musical numbers. There are flash mobs. And some healthy lashings of meta-jokes about romantic comedies, including jabs at requisite romcom scenes and snark toward New York-set “Nora Ephron movies.” It’s a world away from “No Strings Attached,” which began life as “Fuckbuddies” and died as an Ivan Reitman joint. With the wonderful Patricia Clarkson, the wondrous Richard Jenkins, Jenna Elfman, Woody Harrelson, Andy Samberg, Andrew Fleming, a very game sports figure, and the ineffable Emma Stone. 94m. (Ray Pride)