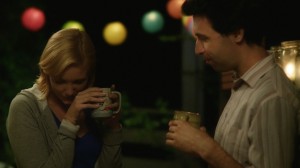 The first feature by Chicago director Dean Peterson, “Incredibly Small: A 300-Square-Foot Love Story,” is indeed an incredibly small, incredibly understated and indelibly bittersweet romantic comedy. Shot in Minneapolis on a fourteen-day schedule, “Small” follows Anne (Susan Burke) as a proficient law student who moves into a bashed, battered, filthy, too-small apartment with her life-to-be-determined-later sculptor-escalator attendant boyfriend Amir (Stephen Gurewitz). Peterson’s apparent influences range from Eric Rohmer to Woody Allen, and he does a more-than decent job of fitting himself for their boots. The couple’s readily apparent mismatch gnaws. Anne’s dissatisfaction with his indolence comes out when she’s just a little liquefied and her best friend is flying high. “I assumed you were having really great sex was why you were together”: Burke’s self-aware muffle of a laugh in response to that presumption is a fine pencil sketch of romantic resignation. Filmmaker Alex Karpovsky, playing a neighbor with designs on Anne, further cements his essential role as the great, passive-aggressive male shit of contemporary micro-budget American filmmaking (“Tiny Furniture,” “Lovers of Hate,” “Harmony and Me”). Man, does he know how to play a shit. Karpovsky’s portrayal of a sense of entitlement and of unceasing disdain is unerring. Peterson’s greatest stroke is his ending: it’s unaccountably tender and affecting. Been there? Don’t do that. With a modestly shambling cameo by Bob Byington (“The Color Wheel”), a wondrously creaky wooden floor and several squeaky doors. 83m. HDCAM video. (Ray Pride)

“Incredibly Small” opens Friday at Siskel. Peterson will appear at Friday-Sunday, Tuesday and Thursday shows. A trailer is below.