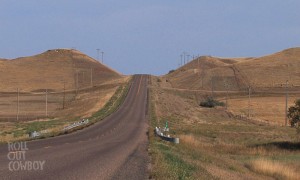 Elizabeth Lawrence’s “Roll Out, Cowboy” follows Chris Sand, the “Rappin’ Cowboy” of Dunn Center, North Dakota, Population 120, an itinerant 39-year-old troubadour touring the West with his unlikely specialty. The loneliness and decline of small-town America is the understated undercurrent of “Roll Out,” as memorable as the genial fumbling of the likable, so-sincere Sand. What life is there for him on the road? What life is there for anyone in these towns? Sand makes a fine figurehead for the disappearing working class that’s followed the disappearing “Middle Class.” Fans of docs like “Anvil! The Story of Anvil” may well be tickled. Lawrence, a Chicago native, worked with a largely Chicago-based crew, several of whom are alumni of the Columbia College Film/Video production program. The cinematography, taking in landscape and rustic small-town interiors, as well as the sound design, are top-notch. 75m. (Ray Pride)

“Roll Out, Cowboy” opens Friday at Facets and runs through July 31. Lawrence, cast and crew will appear Friday-Sunday; Lawrence will appear July 27-31.