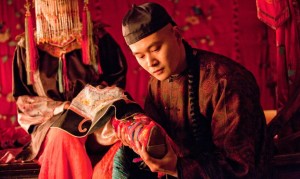 Wayne Wang (“Joy Luck Club,” “Chan Is Missing”) directs a moving saga of long-lasting friendships. Screenwriters Ron Bass, Angela Workman and Michael Ray expand Lisa See’s 2005 novel about two seven-year-old girls who bond in 1829. Both have their feet bound, a contemporary custom for improving their marriage prospects. Snow Flower (Gianna Jun) and Lily (Li Bing Bing) learn nu-shu, a secret language shared by unrelated Chinese women who take lifelong vows of sisterhood. This custom, called laotong, is especially meaningful for women deformed by foot binding and later distanced by moving away to the villages of their respective husbands. Their story unfolds in flashbacks from today’s Shanghai as Nina (Li Bing Bing) reads the manuscript of an unpublished period novel written by her own laotong Sophia (Gianna Jun). Like the two women in the novel their contemporary counterparts suffer estrangement. They reunite when Sophia is hospitalized in a coma after a bike accident. Nina cancels her trip to open the New York office for her employer. This is the second time she sacrifices her career for Sophia, as detailed in another set of flashbacks about their friendship since 1997. Wang displays keen sympathy for these characters. After suppression by the Cultural Revolution, nu-shu is now honored in China as a heritage. Western-style melodrama serves well to recover its secret.  With Archie Kao, Coco Chiang, Hu Qing Yun, Vivian Wu. 100m. (Bill Stamets)