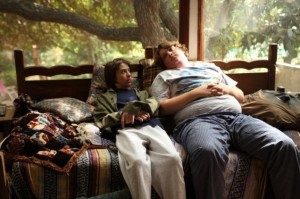 One of the beauties of the three most recent features by Azazel Jacobs, “The GoodTimesKid,” (2005), “Momma’s Man” (2008) and now “Terri,” is how patient he is in finding and shaping narrative rhythms, scaling them to his characters and the actors who inhabit them. Gerardo Naranjo, a sorrowful-eyed silent-movie sad-sack in “GoodTimesKid,” moves curiously through a blurry Los Angeles; in “Momma’s Man,” a son returns home to his parents’ curiosity shop of a loft in Manhattan and refuses to leave. The perambulation of the first and the inertia of the second are patiently calibrated. “Terri” is a California-set teen comedy, but not a teen comedy, not really, another of the latter-day burst of reinvestigations of that genre, a gentle story about the slow emergence of an outsider into his own identity. Terri (an effortlessly commanding Jacob Wysocki) is almost a one-man incarnation of John Hughes’ “Breakfast Club,” a tall, burly, spacey 15-year-old, left to his own devices by a family that’s disintegrated, coming to school in matched pillow-ticking pajama top and bottom. Still, he’s a noticer. The feral, bucolic surroundings are a place for strange creatures to grow. John C. Reilly is also a magnificent misfit as Mr. Fitzgerald, an assistant principal-cum-counselor, dude. “She’s dying of cigarettes, she’s dying of death” is a line that Reilly can deliver like no one else, but it’s his stamp on the word “Dude!” that sings. “What’s there to understand, I’m part of a group of monsters, y’know?” Terri tells Fitzgerald, and Wysocki is as filled with conviction as Reilly. There’s a sentiment toward self-invention in “Terri,” but the movie is never cute, hardly twee, and subtly unique. The delving into teen sexuality is fresh, and unlike all too many American movies about masculinity, self-pity is not on the program. “Terri” feels honest without recourse to bromides. It’s very good. I’d trust Azazel Jacobs with any story he’d want to pursue: he’s very good. A collector of wayward souls and a noticer. With Olivia Crocicchia, Creed Bratton, Diane Salinger, Bridger Zadina, Tara Karsian, Jenna Gavigan, Mary Anne McGarry. 104m. (Ray Pride)