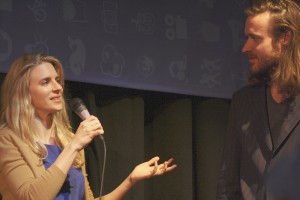 What kind of movie can $150,000 buy you these days? If you’re talking about 2011 Sundance prize-winner “Another Earth,” the reported budget of which was trumped by its near-$3 million purchase by Fox Searchlight, you’re getting a serious, somber, bruised, hopeful, thrilling, shocking, emotions-over-the-line speculative science-fiction romance-tragedy with one scene in it that I cannot tell you how hard it hits and I hope no one else does either. Co-writer-producer-cinematographer-editor-director Mike Cahill, who tells me the filmmakers were given final cut—”Fox has been so supportive and incredible”—and co-writer-producer-star Brit Marling, posit the discovery of a second, mirror planet in the sky, with simple, insistent, even haunting special effects: in the many exterior scenes, oh! There it is. Waxing, waning, growing. “Another Earth” opens with a terrible meet-brute: its two primary characters come together in a tragic accident (again, created with a maximum of invention, with practical effects), a middle-aged composer (William Mapother) and a brilliant young MIT-bound science obsessive (Marling). Part of the courage of “Another Earth” is allowing mixed motives to cross a line, to where the characters become bracingly complex. “Remorse and forgiveness” were the themes cited by the Alfred P. Sloan award jury at Sundance, and that’s the film in three words. I’ve elided plot details in our conversation about one specific scene below. “One of the most fun, exhilarating parts of the art-making is the feel factor,” he observes. “‘This is right! I don’t know why I shouldn’t’ve cut a second earlier or a second later, I just know that it’s right.'”

There are some places where Marling’s character goes beyond amoral. She goes to places where she hopes to find herself, but she’s possibly going to hurt people even more. “Those are the kinds of questions that are the most interesting,” the fantastically exuberant Cahill says. “The movies where the protagonist has to choose between right and wrong are not that challenging. What about choosing between wrong and a little more wrong? She thinks apologizing to this [character] from the get-go is selfish; maybe it’s a better thing to try to make… life better. But that moment when they [have a revealing encounter], it’s really charged. It’s so beautiful if there’s no past, but there is a past. It’s just really wrong but yet maybe it’s what [they] need. I love the challenge of that scene. I love the challenge it presents to the audience of deciding what is right or wrong. On one hand, it is very wrong, but on the other hand, it has its reasons in the bubble that they’ve created for one another that does not acknowledge the past. It does have a place, which is quite beautiful, and the way that rips my mind’s approach to this protagonist is exhilarating.” (Ray Pride)