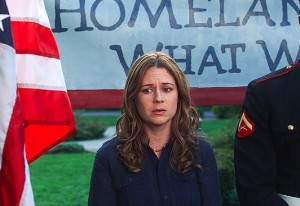 Released a month before the tenth anniversary of the 9/11 attacks, Michael J. Weithorn’s low-budget comedy “A Little Help” asks the question, “Too soon?” and answers in the affirmative. Set in the summer of 2002 on Long Island, 12-year-old Dennis (Daniel Yelsky) can’t just have his mother, dental hygienist Laura (Jenna Fischer, “The Office”) write a note about his father’s (Chris O’Donnell) absence, he has to have a killer out, and claims that he was a fireman and he died in the World Trade Center. Ready, set, flail. Fischer holds the screen in a way that Jennifer Aniston seldom does, her characters radiating an eagerness to please, to be happy, to be left genially alone. She’s so wonderful here. But? Fischer’s also in the middle of a movie that brings in undiagnosed diseases, high-school crushes emerging from the past, sudden death, a panic-inducing parrot, malpractice lawsuits and, well, 9/11. And her character is the baby bird in a nest full of related-by-blood vipers. Weithorn writes of his key inspiration: “At the risk of sounding pretentious (a risk I’ve taken before, usually to poor results), the original inspiration for this film was my deep admiration for the works of Vittorio De Sica” (“Bicycle Thieves”). Outside of Fischer’s beneficent fumbling and always-compelling presence, that attempt at humor may be the funniest thing about the experience of watching “A Little Help.” There’s nothing truly offensive about the goings-on, just a riot of tone-deaf comedy. It’s always too soon when the laughs don’t come. With Lesley Ann Warren as Laura’s mother, and as her sister, Brooke Smith. Winner of Best Picture at the Phoenix Film Festival and the Grand Jury Prize at the Indianapolis Film Festival. 108m. (Ray Pride)