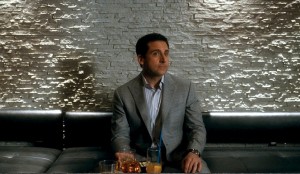 “Crazy, Stupid, Love.” is “Very, Smart, Funny.,” a laugh-racking, cringe-inducing “Rude” Goldberg joke machine elevated by an uncommonly well-constructed script, superb actors and immaculate comic timing across the board—in performance, cutting and pacing. Glenn Ficarra and John Requa directed “Crazy, Stupid, Love.,” working from a script by Dan Fogelman (“Cars,” “Tangled,” “Fred Claus”), and the punchy instinct in their scripts for “Bad Santa” and “I Love You Phillip Morris,” their first feature as directors, are honed to a fine edge. Love’s eternal, and all that, but a long marriage between Cal (Steve Carell) and Emily Weaver (Julianne Moore) has frayed down to general miscommunication and Emily’s infidelity. Separated, Cal broods in a local bar. The movie has so many niceties and rich details, including the everywhere-and-nowhere bar, as cleanly efficient as a set from “Mishima: A Life In Four Chapters.” That no-exit hell on earth is where Cal meets Jacob Palmer (Ryan Gosling), who, if he were to sweat, would reek mightily of Neil Strauss’ pickup tome, “The Game.” Man long off the market is shown the ropes of the modern-day meet market. (When we see the bar shorn of women, it’s a limbo of hopeless, helpless, hopeless, self-selected middle-aged men.) Gosling’s cheesy but cheeky in the role, never oily, especially when he meets the one woman who resists his practiced advances, Hannah (Emma Stone). Stone is memorably so Emma Stone in a very Emma Stone role: having seen her in a small bit in the same week in “Friends with Benefits” is rare delight. She’s the comedienne of the moment, and may the moment last. A line that’s given away in other variations in commercials and trailers, of Hannah’s reaction to Jacob’s abs, “Fuck! Seriously, it’s like you’re Photoshopped,” hits a range of a half-dozen vocal notes. But the small notes are part of a big picture with a large cast. There are feats of metaphoric misapprehension that are a delight to discover. (And a few sour notes among the many sweet ones.) The complications, and the way loneliness refracts the structure as much as longing, evoke four words, and it’s critical heresy to say them aloud: “Ernst Lubitsch.” “Samson Raphaelson.” If you know the movies “Trouble in Paradise” (1932) and “The Shop Around The Corner” (1940), which Lubitsch directed and Raphaelson wrote, you’ll know what I mean. While that dynamic duo worked from implication and innuendo much more than Ficarra, Requa and Fogelman, the interlocking design of the screenplay of “Crazy, Stupid” and how deeply they interlock show ambition to be as good as the great. Marisa Tomei’s small role as a woman Cal meets is a boisterous sidebar, more cartoonish than the other performers but joyful despite some cold, cutting jokes that flow passive-aggressively from Cal’s mouth. Better is tall, wide-eyed Analeigh Tipton, as Jessica, the Weaver family babysitter, whom 13-year-old Robbie (Jonah Bobo) has a crush on, while Jessica has her own odd crush on Cal. Early on, there’s a  “babysitter in the car” scene that is weirdly more anguished, more touching, more terrifying, than the ones in Atom Egoyan’s “Exotica.” The range of expressions that dance across Tipton’s face is wow-and-how. Comedy and drama do vivid battle in an actor given rein, and it’s typical of the highest highs of “Crazy, Stupid.” Producer Denise DiNovi’s credits include “Heathers.” Digitally shot and digitally projected, the cinematography by Andrew Dunn (“L.A. Story,” “Precious”) worries not over blown-out horizons and backlight and concentrates on the topography of faces, finding a specific, sculptured approach to the raft of primary characters. It’s not always flattering, but it’s fascinating. The front credits don’t list the cast, leaving the actors in several smaller roles as surprises. 116m. (Ray Pride)