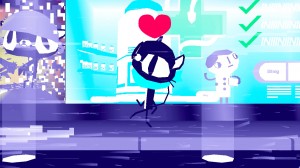 A whiz-bang rush of visual delight, “Nine Nation Animation,” compiled from entries that were programmed in Cannes, Berlin, Annecy and Clermont-Ferrand, is one of the best compendia of contemporary animation I’ve seen in too long. There’s nothing hit-or-miss from the latest assembly from The World According to Shorts, a program initiative from Brooklyn’s BAM. One of my favorites is the stop-motion marvel, “Average 40 Matches” (Turkey) by Burkay Dogan and M. Sakir Arslan. Matches rule the kitchen and madness will take the day; but first, a cigarette. The origins and fate of the world’s-largest Buddhas at the hand of the Taliban are told gently in “Bâmiyân” (France) by Patrick Pleutin. But the best may be the hallucinatory “Please Say Something” (Ireland-Germany), by David O’Reilly, which has a cat and mouse negotiating their relationship sometime in the future, animated in 8-bit electronic styles of the recent past: it’s ten insanely true and great and noisy and hyper-imaginative minutes. Plus the subtitles for the bleep-blip-miaow dialogue are as spiteful filthy as anything I’ve seen since the great, lost “Tamala 2010: A Punk Cat in Space.” If Chris Ware’s Jimmy Corrigan were  a real character, and he’d had electroshock, again, recently, it would be his favorite cartoon. Other worthy entries come from Belgium, Croatia, the UK, South Africa, Sweden and Norway. 82m. (Ray Pride)

“Nine Nation Animation” opens Friday at the Music Box. The trailer is below.