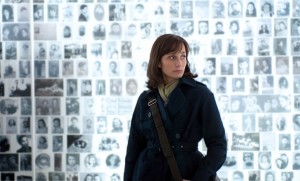 Eleven thousand children left France on trains headed for Nazi death camps. “Sarah’s Key” is the engaging saga of a 10-year-old girl who hid her little brother from the French police rounding up Jewish families. As soon as she can escape from a transit camp, she returns to Paris clutching the key to a locked cupboard. Her family’s apartment has already been taken by another family. Uncovering the fate of Sarah and her brother is the mission of an American journalist in present-day Paris. Julia (Kristin Scott Thomas) is working on a magazine article about the July 1942 detention of thousands of French Jews in the Vélodrome d’hiver, a bicycle stadium, prior to deportation. But she discovers that the apartment her French husband inherited is part of that story. As the rehab progresses, her research takes a number of deeply personal turns. It’s as if she appoints herself guardian of the Holocaust-orphaned Sarah, even as Julia’s untimely mid-life pregnancy undoes her marriage. Director Gilles Paquet-Brenner moves with care among the genres of period tragedy, investigative suspense and career-woman melodrama. As she travels between generations—and from Rome to Boston—Julia repeatedly encounters wrenching refusals to deal with Sarah’s legacy. With co-writer Serge Joncour, Paquet-Brenner adapts a novel by Tatiana De Rosnay, formerly Paris editor of Vanity Fair. As with the recent releases, “One Day You’ll Understand” and “Incendies,” you may appreciate the way “Sarah’s Key” covers similar terrain with similar insights. With Mélusine Mayance, Niels Arestrup, Frédéric Pierrot, Michel Duchaussoy, Dominique Frot, Gisèle Casadesus, Aidan Quinn, Natasha Mashkevich. 111m. (Bill Stamets)