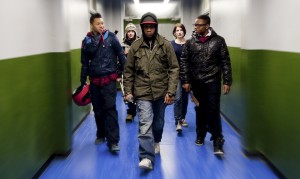 Fireworks come screaming across the sky. Near the hulking fortress of a London housing estate, five teenagers are mid-mugging. It’s Guy Fawkes Day; a larger flare falls to earth. Monsters. Alien monsters. Who can save the “block”? Five unlikely heroes and their once-victim, now reluctant co-human, are on the run, through the streets, through the vast estate’s corridors as more monsters land and hunt. There’s only one enemy now. (“Inner city vs. outer space” is one of the filmmakers’ coinages for the elemental conflict.) Running under ninety minutes, even with end credits, Joe Cornish’s debut feature is triumphantly rude and violent and headlong thrilling and even funny, honoring worlds of influence that came before. The richest gift of Cornish’s work is how it’s permeated with influence, but he listens to film history the way he listened to the kids near his home and the actors in his film to create its fast, funny lingo: transformatively. Part of his screenwriting process was to interview teens from nearby and painstakingly transcribe their patter. There’s a killer exchange between two kids about the virtues of The Guardian’s trustworthiness versus money from Murdoch’s Sun that he admits came from their mouths. But there are perfectly measured, written jokes: “You got mad skills for puppets” and the exquisite panic of “This is too much madness to explain in one text!”

“The Poseidon Adventure.” “Alien”‘s ship, Nostromo.  “Dark Star.””Die Hard”‘s Nakitomi Plaza. Walter Hill’s “The Warriors.” The rain-slicked Chicago streets of “Streets of Fire.” The 1970s-1980s look extended to the use of similar lenses and techniques as “The Warriors,” and a smaller role goes to a teen who’s a photocopy of that film’s “Rembrandt” character. For aliens, “Critters” and “Gremlins.” Teens: “The Outsiders.” “Rumble Fish.” Chases: Besson’s “Subway.” “Diva.” Carpenter again: “Escape From New York.” (Imagine being 15 and getting to play the stoic heroics of Snake Plissken. Uh-huh.)

Where his sometimes screenwriting partner Edgar Wright allows references to swing from the chandeliers, as in “Scott Pilgrim vs. the World,” Cornish injects them into the brisk terror-blitz bliss of the narrative. “Well, that’s really flattering and that’s really, really a nice thing to hear,” he tells me, “Because that’s absolutely what we wanted to do. The funny thing is, it was interesting working with a cast of this age—the cast were anywhere between 10 and 17. They don’t know those movies. They might know those movies, but from Saturday afternoon TV. So this generation is experiencing our theatrical movies like my generation experienced the movies of the sixties and the seventies, but on the TV. There’s a generation to whom those references mean nothing! Or they’re not really references, they’re kind of vibes, aren’t they? Atmospheres and a feeling. On a purely practical level, I wanted to make a movie that could be related to by the type of people who are in this film, the characters who are in this film. And I know that generation doesn’t know those references, so there was no point in putting across ideas or stylish beats that required a knowledge of those movies.”

The movie takes place a few days after Halloween, Guy Fawkes Day in England, which is why there are so many fireworks in the sky, but like so many other things, “Attack The Block” takes for granted you’d know that. “We could have maybe, yeah… is it confidence or foolhardiness?” Both, I say, meaning it admiringly. Cornish laughs. “It’s a first film. It’s a lot of the actors’ first film, first-time DOP [director of photography], we just had a thing we wanted to do and we did it. It’s not really premeditated in that way. It’s very much from the heart.”

“It struck me that there was a chance to make a genre film, that these kids looked really great, like they were ninja or out of a western,” Cornish said more expansively in the film’s press notes. “They have vehicles like mopeds and bicycles and mini-mopeds. Not only do they have great costumes and great vehicles, they have very cinematic weaponry as well, with samurai swords and baseball bats and fireworks.”

Cornish lives in South London, and while the film was shot in the disused Heygate Estate at Elephant & Castle where part of “Hereafter” and “Harry Brown” were set, the ostensible location is very near his daily life. He was concerned with proper patois while also stylizing the language, but not to the point of the language that Anthony Burgess confected for “A Clockwork Orange.” “I was looking for anything in this world that reminded me of science fiction. I wanted to make a science fiction film set in this world that didn’t betray the reality, or the rules of [our] world. So the block looked like a spaceship. The BMXes that they ride reminded me of ‘E.T.’ The architecture reminded me of ‘Metropolis’ and the language did remind me of Nadsat from ‘A Clockwork Orange.’ Science fiction is full of little secret terms, isn’t it, that only cognoscenti understand. I remember reading the novel of ‘A Clockwork Orange’ and it feels like gobbledygook at the beginning, but by page 10, weirdly, you start understanding it. Then by the end of the book, you’ve made a deeper connection to the material. You feel like you’re in that world, you feel like you could have a conversation with them. That’s what excited me. I dunno, I just think it’s cool the way that young people invent a secret language that adults don’t understand. I think it’s probably part of the process of language evolving, really.”