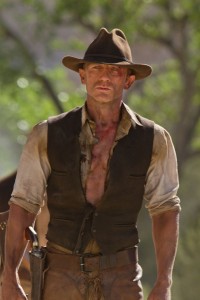 It’s my fault for going in hoping for “The Proposition”-meets-“Starship Troopers.” Instead, generic title begets generic results in the tepid “Cowboys & Aliens,” brisk professionalism of a middling order. Jon Favreau’s first film since the congenially scatty “Iron Man 2,” from a script credited to Roberto Orci & Alex Kurtzman & Damon Lindelof; Mark Fergus & Hawk Ostby; and Steve Oedekerk, demonstrates that craft takes you only so far. (The ampersand in screen credits indicates writers who worked together as teams; the ampersand in “Cowboys & Aliens” is more mysterious.) The opening scene of spirited splatter from our supposed hero, an alien or Starman or Man With No Name or amnesiac (Daniel Craig) is promising. Craig plays terse and rugged well enough, but the sly twinkle of his best acting is absent (“Fateless,” “The Mother,” “Enduring Love,” “Love is the Devil”). Almost like a so-so movie by co-producer Ron Howard, “Cowboys & Aliens” is turgid without messy bits to keep it interesting, slick without the sleekness of high style. (Cinematographer Matthew Libatique has done better work in “Black Swan,” “Iron Man” and “Josie and the Pussycats.”) As the corrupt keeper of the remote desert town of Absolution, the 69-year-old Harrison Ford looks papery and snaps peevish: it’s almost the same performance Rupert Murdoch gave before committee in British Parliament, or more to point, the persona Ford takes on during most interviews with figures lesser than David Letterman. As Ford croaked one unmemorable line after another, my mind drifted affectionately toward Johnny Depp’s twerpy but distinctive vocalizing in “Rango.” Fragments of other Westerns eddy, but it’s pop pastiche without punch. It’s well and good we joined forces with Apaches to banish intergalactic gold gobblers back in 1875, I guess, but it’s mostly SFX-to-SFX, dust-to-dust. It’s a keen reminder of how spare and stark and good George Lucas’ original “Star Wars” was in repurposing the movies he watched as a pup. The penultimate scene of “C&A” quotes part of the perfect, haunting classic last shot of John Ford’s “The Searchers,” but a seemingly tacked-on scene follows, where the surviving members of the cast look like they’ve come off a nice break. There’s not enough greasy id stuff, not enough universal dread. How many regular moviegoers of any age or demographic ever held any fear toward insectoid mucus-monsters that have been gargling their way through too many recent movies? The lupine hedgehogs of Joe Cornish’s “Attack the Block,” by contrast, are simple and inventive, taking notes from the creature work in Joe Dante’s “The Howling” and “Gremlins.” While the creatures of “Cowboys & Aliens” leap and lope, they’re like big milk bugs that were on close-out at the big Bug Barn out on the far reaches of Lankershim Boulevard. The only jagged edges, which a movie like this cries out for, come near the end, where aftermath of a detonating rocket looks uncannily like the tragedy of the space shuttle Challenger, and a brief glimpse of the leavings of abducted humans—piles of glasses, weapons, clothes, and a colleague swears, of teeth as well—suggests Nazi depredations. Okay, I’ll give “Cowboys & Aliens” this: it’s not in 3D. With Olivia Wilde, Clancy Brown, Paul Dano as Ford’s son, in a couple of scenes hesitating-enunciating like a lanky Walter Brennan, and Keith Carradine in a full-faced, full-bodied reminder of his father, the great Westerns actor John Carradine. 116m. (Ray Pride)