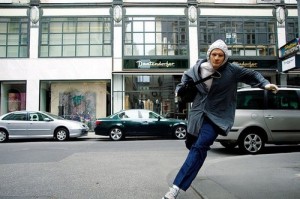 Director, co-writer and co-editor Benjamin Heisenberg could have titled his psychological study of a fleet Austrian thief “Der Renner” instead of “Der Räuber.” In the Austrian-German co-production “The Robber,” Andreas Lust plays a taut, opaque runner and robber named Johann Rettenberger, based on 1985-1988 news accounts of the late Johann Kastenberger and drawn from co-writer Martin Prinz’s 2002 novel “Der Räuber.” Johann leaves prison, where he trained intensively, and resumes his running and robbing careers. This athlete pulls off bank jobs with reckless compulsion, wearing a mask and wielding a pump shotgun. Why he robs and runs is left unclear. Neither trophies nor Euros matter to this cypher. His only attachment is to Erika (Franziska Weisz), a social worker he seems to know from his never-revealed past. They go out one night to watch an action film the soundtrack to which is packed with explosions and sirens. At this point she has no idea what he does all day besides train for races. Lust reports that Heisenberg advised him: “We are making a wildlife documentary; we are observing a puma in its natural habitat.” If the existential key to this criminal hides in his eyes and stride, the kinetics of hold-ups and escapes make for lyrical action. 97m. (Bill Stamets)

“The Robber” opens Friday at the Music Box.