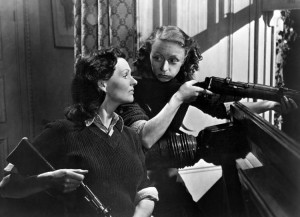 Bliss. There are movies and there are films, then there is the unholy wallop of dreamlike madness and ecstasy in the rare, unified gem like the long-unseen Alberto Cavalcanti’s “Went The Day Well?” Based on a Graham Greene story, this 1942 suspense thriller was made as wartime propaganda and purports to be about lasting British virtues. Not only is it funny, it’s surreal, violent, lovingly imagined in images and sound, and ultimately, a tantalizing hallucination of unease and oddity. The British stiff upper lip is as swift and forceful as a bayonet. Starting as comedy and turning very black, Cavalcanti’s masterpiece (a word that falls readily into place here) depicts violence and its terrible results with rare vividness. It’s an Ealing Comedy, but certainly that accomplished studio’s most shocking. This 35mm reissue is from the invaluable Rialto Pictures, whose most recent releases include Roeg’s “The Man Who Fell To Earth” and Bresson’s “Diary of a Country Priest.” Fine company: and deserved. With Basil Sydney, Leslie Banks, Muriel George. 92m. (Ray Pride)