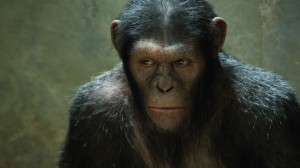 Holy apeshit! One of the terrible dangers writing a deadline review about a wildly satisfying entertainment like “Rise of the Planet of the Apes” is inadvertently revealing the goods in simple synopsis that ought to be superb surprises. (You begin to appreciate a pair of thumbs, even opposed ones, in a case like this: thumbs up, dude. Thumbs up.) The terrific thing is the fact that there are even surprises, inspired surprises, working off a story everyone thinks they know already. There’s a freedom in that aspect for storytellers, as with “Titanic”: the boat sinks. Now let’s get down and get tragic. “Apes”? Somewhere in the unseen future, Charlton Heston catches sight of an iconic landmark poking from the sand by the sea.  Mankind, somehow, some way, ruined itself and power passed back to primates. Somewhere unspecified, closer to the present, director Rupert Wyatt’s fall of man is told with gratifying speed and efficiency. The filmmaking skates fluidly past a fistful of implausibilities in Rick Jaffa and Amanda Silver’s script. Subtext: you can read “Rise” as a PETA Pan story for animals that do one day grow up and lead an animal-rights insurrection. (Oh, and there’s no place like “Home.”) Wait, have I given too much away? Our callow, not-quite-saintly scientist Antichrist comes in the tousle-haired form of understated James Franco, instead of Stoner James or Poet James. This is a good James. Andy Serkis, the Yo-Yo Ma of motion-capture, plays the increasingly thoughtful chimpanzee, Caesar, who’s been liberated from the lab. Simple opposition plays out. Big Pharma: bad. James: Earnest. Honest. And inadvertently: bad. What’s the harm in taking experimental drugs out of the lab, honest? (Father-son dynamics play through, too.) San Francisco and the planet will soon find out. Intriguingly, the well-known story of the failed 1970s experiment with a chimpanzee named “Nim Chimpsky” has complementary versions released this summer: “Apes” is the pop operetta next to James Marsh’s baroque domestic tragedy, “Project Nim.” Still, both the documentary and the action epic are about hubris, the hubris of a race that would presume you could domesticate a chimpanzee, and also name a pharmaceutical company that’s doing genetic research “GenSys” (the missing “e” is filled by a strand of DNA). “Apes” tends toward visual poetry rather than over-explaining: in one unbroken sequence-shot, three years course past through Caesar’s first swing from redwood to redwood in the Muir Woods. Plus, fog and mist, blood and water, droplets of destiny, and a series of climactic images that promise the end of us all. “Rise Of the Planet of the Apes” is the prettiest suicide note to the human race since Robert Bresson’s “The Devil, Probably.” And seriously, I eagerly await a non-deadline piece that notes the genuine similarities between “Rise” and Terrence Malick’s “The New World” and “The Tree of Life.” Patrick Doyle’s score is busy, but there’s all manner of undertone and counterpoint, at moments resembling the urgent, elegant jauntiness of Stephen Warbeck’s seductive score for “Proof.” Cinematographer Andrew Lesnie’s credits include the two “Babe” pictures as well as the “Lord of the Rings” saga and the two upcoming “Hobbit” films. That’s a benefit, working hand-in-mo-cap-suit with the WETA special effects house once more, but framing and camera motion are dynamic in even the simplest scenes. “Apes” got a “Proggy” from the animal rights activist group PETA, its seal of approval, for not only not harming any animals in the course of production, but for not using any simians. So Serkis? There’s an Oscar waiting to happen, even if there’s no proper respect for the marvels he performs. His is bright-eye pantomime for the ages. Maybe with the inevitable, can’t-hardly-wait prequel-sequel? With Freida Pinto, John Lithgow, Brian Cox, Tom Felton, David Oyelowo. 105m. (Ray Pride)

“Rise of the Planet of the Apes” is now playing.