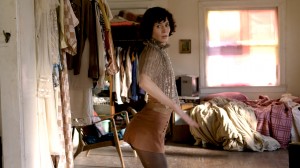 “The wrecking ball has already hit.” That’s one of the more haunting lines from Miranda July’s second feature, the alternately depressing and elating “The Future.”  The words are spoken by a cat with not long to live. “Paw-Paw” is in quarantine, awaiting the time it can leave with new owners, thirty days from now. Jason (Hamish Linklater) and Sophie (July) are in their mid-thirties, lost in their lives and in their dusty warren of a shadowy Los Angeles apartment. He takes tech support calls; she wants to do dances on YouTube more expressive than the leaps and jumps she teaches little girls.July’s character is stilled, but Linklater’s is all but lifeless, a spaniel-tressed mirror man to her wide-eyed wooly-minded curly-headedness. Between them, inertia has congealed. Their melancholy borders on depression and mental illness. But, weirdly, it’s an urgent melancholy, sardonic fatalism, the self-willed sadness of the boho manqué. They’re consumed by their unbearable lateness of feeling uncool. From the first seconds, you’re hit by a ton of bricks or a large sock full of horse manure: “I am cat which is belonging to you,” the knotted-fur Maine Coon-looking cat says, looking like my last cat as she was dying. Come to think of it, so do the two of them. Bedraggled would be the kind word. As the movie progresses, the couple are near insufferable, suffocated, suffocating. Halfway through, things shift. Tentative encounters with the world outside the apartment as the two separate for their days lead to scenes of magical miserabilism, and July’s instincts as the child of the images of Wim Wenders and the aphorisms of Barbara Kruger comes clearer, and Jon Brion’s score, more of a succession of gorgeous tones, increases the tension. July lingers on details like the same M.C. Escher print being on the wall in two apartments, but it comes across as the characters’ discovery of oddments in the world rather than a blunt statement about her narrative choices. July performs the interludes with Paw Paw as a pair of paw puppets and her scratchy cat voice atop them. Eventually, it works. But the moment of transcendence, that elevates “The Future” into something remarkable is when Sophie, left to her own devices in another man’s bedroom, finally discovers and performs an expressive dance, wrapped in a sea-sized yellow t-shirt, its folds as descriptive as the billowing costumes for many Martha Graham dances, in which an entire female form is consumed, subsumed, transformed by fabric. The future? It hasn’t happened yet. It begins directly afterwards, after “The Future,” once these ghosts have gone, returned to a past life, onto other ones, after they’ve turned the page of an age-baked paperback that’s close to breaking down into flakes. With David Warshofsky, Isabella Acres and the late Joe Putterlik, to whom the film is dedicated. 91m. (Ray Pride)

“The Future” is now playing at the Music Box and Evanston Cinearts.