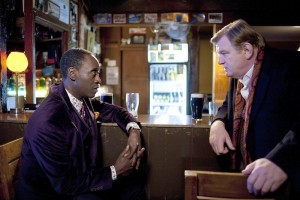 John Michael McDonagh’s debut feature is a Western, cop-buddy, fish-out-of-water, “In Bruges”-style, talk-talkative scrappy fucker of a comedy, teasing and vulgar and so full of movie-movie love: you might miss how smart it is smiling at the sly goodness of performances by Brendan Gleeson and Don Cheadle. Sergeant Gerry Boyle (Gleeson) is a smart man playing dumb in the middle of his career in the outback of the West of Ireland in the tiny town of Connemara: while constantly needling his colleagues and superiors with his subversive humor, he’s a repository of the accumulated knowledge of the common man. After the disappearance of his new partner and reports of a huge drug run in the offing, an American FBI agent, Wendell Everett (Cheadle) arrives. They’re an immediate mismatch, and Cheadle’s range of physical gestures and expressions that ask, “Are you fucking with me?” is wide and deep. But it’s a profane and generous joy from the get-go. Produced by his younger brother, playwright and filmmaker Martin McDonagh (“In Bruges,” “A Behanding in Spokane”), “The Guard” bears a similar joy in verbal byways and slipstreams, sly digressions of “craic,” or the Irish gift for a love of a bit of the banter. Not so jokingly, McDonagh says the movie is “John Ford meets Preston Sturges,” and the characters are sometimes just an inch from knowing they’re in a movie. McDonagh’s got impeccable taste in more than actors: The lovely, subdued, mock-spaghetti western score is by Calexico. Cinematographer Larry Smith’s diverse credits include “Eyes Wide Shut,” Nicolas Winding Refn’s claustrophobic “Fear X” and his bold “Bronson.” The stylized look of the movie also owes much to production designer and costume designer Eimer Ní Mhaoldomhnaigh. Talking to McDonagh recently, he told me his next movie is also a comedy, but it would also be a Bresson-style movie, about a priest’s temptations. Pray he keeps his creative crew from “The Guard.” With Liam Cunningham, David Wilmot, Rory Keenan, Mark Strong, Fionnula Flanagan, Dominique McElligott, Sarah Greene, Katarina Cas. 96m. (Ray Pride)

“The Guard” is now playing at Landmark Century, Evanston Cinearts and Landmark Renaissance.