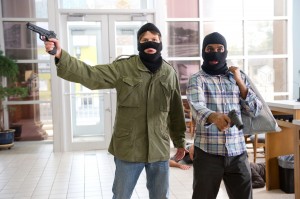 Director Ruben Fleischer (“Zombieland”) and screenwriter Michael Diliberti deliver all the fun of watching two dumb-asses in apesuits screw up a get-rich caper of locking a bomb vest on a pizza-delivery guy (Jesse Eisenberg) to make him rob a bank so they can hire a hitman to kill a lottery-winner and inherit enough to open a tanning studio to front a prostitution operation. Set and shot in Grand Rapids, “30 Minutes or Less” is a good-buddy, bad-buddy deal that’s put together with enough smart lines, including one about “The Hurt Locker” on a Netflix queue,  and clever plot complications, to set it apart from the run of dumber action-comedies. Fleischer claims the script grafted the likes of John Landis and the Coen Brothers. His hybrid yields a half bushel of late summer laughs. With Danny McBride, Aziz Ansari, Nick Swardson, Dilshad Vadsaria, Bianca Kajlich, Michael Peña, Fred Ward. 87m. (Bill Stamets)