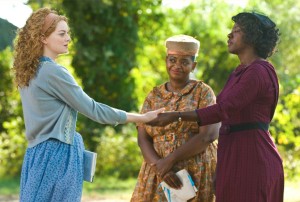 Skeeter (Emma Stone) is a misfit in her circle in early 1960s Jackson, Mississippi: not only did she finish her studies at Ole Miss, she did not marry yet and she wants a career as a writer. She gets her start at the Jackson Journal. To pen an eight-dollar-a-week column signed “Miss Myrna,” she must get help on household tips from Aibileen (Viola Davis), the maid of her best friend in the Junior League. Largely raised by the black help, these white daughters of privilege don’t know much about cleaning, cooking or childrearing. Skeeter entreats Aibileen to tell her life story. After the assassination of Jackson activist Medgar Evers on June 12, 1963, other maids secretly share their tales of working for white families. This oral history of the voiceless is more than “sass-mouthin'” the Man and his Missus. “A book like this has never been written,” enthuses the ambitious Skeeter, whose bookshelf includes Richard Wright’s “Native Son.” Over the telephone, an editor (Mary Steenburgen) at Harper & Row in New York City urges: “Write it fast before this whole civil rights thing blows over.” “The Help” warmly interlaces the lives of white and black women with just a few winces of condescension on both sides of the color line. Southern kinship on a cash basis is the crux of this story of race, class and sisterhood. As a period piece, “The Help” makes good use of Bob Dylan’s 1963 song “Don’t Think Twice, It’s All Right,” and can find light moments in the obscenity of a local campaign to legislate toilet apartheid for domestics. The expression “shit-eating grin” will be served with a colloquial spin. Tate Taylor (“Pretty Ugly People”) directs his screenplay based on the first novel of his childhood friend Kathryn Stockett. Both come from Jackson. Published in 2009, “The Help” is still popular. The only copy left on the shelves at the main Chicago Public Library is a Polish translation; another Polish copy is checked out. A long crane shot at the end tells us that literature can set one on the road to freedom. It’s a self-congratulatory grace note for this affirmation of female fulfillment. With Octavia Spencer, Jessica Chastain, Bryce Dallas Howard, Allison Janney, Chris Lowell, Sissy Spacek,  Cicely Tyson, Mike Vogel. 137m. (Bill Stamets)