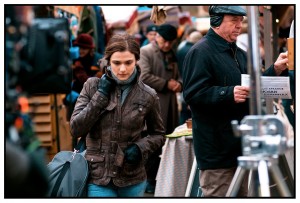 Larysa Kondracki’s alternately earnest and brutal true-life melodrama, “The Whistleblower,” up to its knees and over its ears in a virtuous subject—a female cop (a fine, fierce Rachel Weisz) who discovers the depths of sex trafficking in 1999 Bosnia-Herzegovina—manages to provide intermittent tension and telling detail even when the uneven script moves woozily from dungeon to boardroom. Weisz plays Nebraska single-mom Kathryn Bolkovac, hired as a private contractor to UN enforcers, needing the money to pay for a child custody struggle. Bolkovac discovers a few things about herself, but also a blindingly depressing amount about what she sees as an intricate international conspiracy in humans for sale. There’s nastiness late in the film, appropriate to the subject yet not as nuanced as the more convincing moments of “The Whistleblower.” As an emotionally engaged portrait of victimization, Lukas Moodysson’s “Lilya 4-Ever” trumps it readily, and as a conspiracy thriller, this Canadian-German production is no “Three Days Of The Condor,” nor is it “Z,” but it’s a decent distance from zzzzzzzzzzz. With Monica Bellucci, Benedict Cumberbatch, Vanessa Redgrave, David Strathairn, Nikolaj Lie Kaas, Liam Cunningham, Rayisa Kondracki, Roxana Condurache. 112m. (Ray Pride)

“The Whistleblower” opens Friday at Landmark Century and Landmark Renaissance.