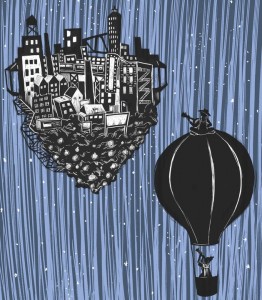 The debate over which part of the country has the best music has been teetering back and forth since vinyl was first mass-produced and sold in record stores across the country.

So it’s natural to think a film about the nineties post-rock scene in Chicago would be a sprawling treatise on how the quality of music here regularly trumped that of the grunge marketing machine in the Northwest. That’s not the case with “Parallax Sounds.” While the still-in-progress documentary by Italian director Augusto Contento focuses on that unique movement, it’s more about discovering how the landscape of a city affects the art created there from an outsider’s perspective. Damon Locks, Ken Vandermark and Steve Albini have already participated.

“It’s not really a documentary about post-rock, or music,” says the film’s assistant director Kenya Zanatta, who worked with Contento on his last documentary, “Tramas,” about life in São Paulo, Brazil. “It’s more general, about Chicago, creation and the spirit of the city, and how that spirit is embodied in the art here. “It’s trying to explore the reality of a city beyond outside representations of it, beyond all these representations in media,” Zanatta says.

And the connection between the art and the city’s culture is already apparent to the filmmakers.

People here have been overwhelmingly friendly and willing to help with people letting us inside their houses,” Zanatta says. “And I think that was really connected to what musicians have been telling us about how music was being created in the nineties. People would collaborate, borrow equipment, playing in different bands. And we can see that beyond the music.” (Alex Baumgardner)