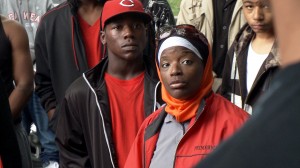 “We have over 500 years of prison time at this table. That’s a lot of fucking wisdom.”

Just over fifteen years after “Hoop Dreams,” Steve James and Alex Kotlowitz followed another Chicago group’s dreams, members of CeaseFire, offenders gone right, across four seasons of interventions in Englewood. Almost every spoken word is as piercing as that profane insight from a meeting at CeaseFire headquarters. “Violence interrupters,” they’re called, working from the idea of CeaseFire’s founder, epidemiologist Gary Slutkin, that violence is in itself “an infectious disease.” Kotlowitz, the film’s co-producer, wrote the classic “There Are No Children Here,” as well as the 2008 New York Times magazine article on CeaseFire that inspired James to ask his friend to collaborate on “The Interrupters.”

Kotlowitz has written that he and director-co-producer-cameraman James “wanted this film to knock people off balance, to get people questioning some of their assumptions. But most importantly we wanted to both put a human face on those living in our most devastated communities—and to give all of us some reason for hope.” And in two hours of shocking, breathtaking, heart-filled, novel-dense storytelling, the filmmakers do just that. (Comparisons to David Simon’s “The Wire” are inevitable and unnecessary.)

For a week now, I’ve tried to reconcile the two versions of “The Interrupters” that I’ve seen: its unfinished 161-minute Sundance premiere, and the final, 125-minute theatrical cut that opens Friday at Siskel for two weeks. (There’s a version in the middle that played at film festivals between then and now.) Actually, there’s no reason to think about it: the two-hour version is shapely, swift, engrossing, finished. Finished as a feature film, that is.

I suppose what I was hoping to contrast was my original discovery, the shock of first encountering the charismatic Ameena Matthews, the able listener Cobe Williams and the eager-to-tell-stories Eddie Bocanegra, the three interrupters who are the core of the film, with the film that opens this week. “When I was growing up in Englewood, we looked out for one another,” Matthews says ruefully. “To me it’s like there’s still some hope left. I love Englewood,” she says, Chicago-born, Chicago-bred, Chicago hopeful.

There’s less raw language now, but there’s plenty still, and there are bursts of on-camera violence. The most horrifying moment, a video of a killing that was broadcast around the world, is judiciously blurred yet does not lack impact, especially when “The Interrupters” goes to the young man’s funeral and encounters his friends and family. But it’s no less horrifying when an elderly funeral director, whose trade is more in the young than in the elderly, says, “While I see a black man leading the free world on television, I’m still burying black kids. It doesn’t make sense to me.”

Still, the film not only suggests, but also demonstrates, through the heroic investment by its subjects, day to day, that the cycle of violence can be broken, and must be broken. In the words of one, the goal is “humility and not anger.” These are powerful stories of trust, transformation and renewal of hope in Chicago streets and the hearts of America. Coincidentally, James is in London this week for the debut of the film there; a Monday night screening cut short by a power outage continued as a conversation on the street between filmmaker and audience, while elsewhere the streets were literally on fire.

Can the stories, these powerful stories of trust, transformation and renewal of hope in Chicago streets and the hearts of America, apply elsewhere, down other streets? As an example, to be sure, and as an exemplar of observant, patient, longitudinal documentary filmmaking. The rhythms within scenes and during transitions established by James and his co-editor Aaron Wickenden, is impeccable, as well as an eye for the telling, specific, seemingly throwaway detail. A street-scene press conference finds Jesse Jackson on the margins, leaves him there. A house’s address, “2830,” is missing the “0,” but has been drawn in. The flutter of a newspaper fallen on a street, caught in a passing car’s draft. A postman’s cart stops just so moving across the frame. It’s ordinary and it’s immediate. It’s a world of neighborhoods and blocks and front steps. And: A montage of provisional shrines to the slain finds one card to young “Shane” held aloft by a stiff breeze, and ends with a retaining wall’s paint-sprayed “I AM NEXT.”

The closing shot is elegiac, literally dazzling, as sunset ripples golden-orange across the skyline seen from the west, not from the Lake or from the north. It’s an image that also says “Chicago,” and says that cities, and Chicagoans, and the hope for a better nation still stand, and stand strong. It’s a powerful image, echoing an earlier shot in James’ career: the fade-in of “Hoop Dreams.”

“The Interrupters” opens Friday at Siskel for a two-week engagement.