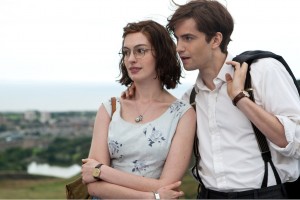 Why do people fall in love with some romantic comedies, and not with others?

Recent releases like “Friends With Benefits” have played up “meta” elements, making comedy out of expectations from both the stories we’re told and the stories we tell ourselves, with some success, both as comedy and commerce. Others, like “One Day,” a kind of “friends without benefits” which opened last Friday, Lone Scherfig’s follow-up to “An Education,” meet with abrupt choruses of critical disapproval. Man, do writers get angry! The wholehearted hater of halfway-decent romantic comedies sounds always like a spurned lover.

Adapted by British novelist David Nicholls from his 2009 bestseller, “One Day” always ran the risk of disappointing those who liked his jaunty prose and goofy jokes, and of course the characters are imagined by every reader before it hits the screen: My Emma looks nothing like Anne Hathaway! My Dexter laughs nothing like Jim Sturgess!

July 15, 1988: The book and the movie follow the same path, starting from the day Dexter Mayhew (Sturgess) and Emma Morley (Hathaway) meet upon their college graduation and dip in at successive July 15s. His career tends toward television, hers toward books. What follows on film is a bouquet of moments, some funny, others bittersweet; some of the passages, some of the particular years, not as successful as others.

“One Day” has poppy, satirical fun with the era its characters rush through, telegraphing time through changes in style—haircuts are always a dangerous thing when depicting the passage of decades—even as certain things stay the same, such as Emma’s black Doc Martens boots and sea-foam-green manual typewriter. Hathaway’s English accent was found suspect by English reviewers, who traditionally hold advanced certificates in “Class As Heard Through Regional Dialect.” But Hathaway captures something about the lit striver, the girl novelist, her large eyes and vast teeth like an anime version of the self-image of smart female literary hopefuls in their twenties. (She also does well with the geek quotient in murmured self-deprecations like “My hair smells of cheese.”)

Emma settles, Hathaway conveying in mumbles and swallowed, witty asides. “It’s also her overcompensating for her being insecure,” Scherfig says in an interview. “It’s a way of keeping things away from herself, making fun of everything.”

The stylized look of the movie is often class-and-cash aspirational, storybook-shy-of-catalog. Objects root not just our attention as the story progresses, but also begin to accrue as if the story were only in the memory of one of the characters. There’s a late scene where the story slows down, and Emma is in a small but comfortable Paris apartment, at her writing desk in jeans and oddly bright green flip-flops, and a column of afternoon light crosses, like a sunbeam across a carpet in a Terence Davies film: a fine way to depict a writer, transfixed. Working with French cinematographer Benoît Delhomme (“Cyclo,” “The Proposition”), Scherfig moves gently to the edge of melodrama in a lovingly calibrated scene near the end of the movie, where afternoon light eddies, blooms, dims, on the happiest of days, from blue dusk to the violet hour.

Nicholls actually even inserted a reference to Kieslowski into the script—Scherfig laughs—where two characters disagree in front of a theater marquee on “Army of Darkness” versus “Three Colors Blue.” It would be foolish to make comparisons, but there seems to be a strong influence. “That’s good if you feel that! I mean, if you’re not disoriented or lost” by the storytelling style, “but just feel that there’s something about it that is appealing but not super-explained, that’s fine.” She pauses for a bit.

“I’m really afraid to be pretentious or pompous,” the Danish director says, “but I’m also European and the D.P. is European, so sometimes a thing grabs you or the way you decide to go…” She shifts a little. “On this film, I’ve done it a little more than normally, an attempt a little more to do things you can only do on film. Like some of the underwater shots where she’s swimming that are just abstract, where you can’t say, ‘This means exactly that.’ I think it’s something you have to do when you adapt a book, in order to make sure that it becomes cinema, to go ahead and push the gas pedal on some of the cinematic devices, so it’s not just filming a script, but making use of the cinema itself. That scene in the study where the sun swipes the floor and there’s a little feather that the wind is figuring, some of the more comedy-oriented elements, goldfish on a table in a restaurant, where you could say, that goldfish symbolizes how stuck he is, but it’s also just a close-up of a goldfish! It’s not a metaphor; it’s just an image. I’ve done more of that than normally.”

She says she had the faith of her producers. “I think also it’s something that Benoît and I had decided to get the best out of all these locations we were in. It also has to do with Focus [Features]. They want you to take charge, they trust directors, they expect that you step up to their expectations, which is really great.”

“One Day” is now playing.