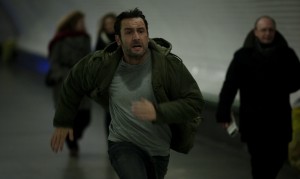 Starting with a crash and a bang and falling ever forward from there, “Point Blank” is a edge-of-the-edge-of-your-seat, headlong, heedless, breathless chase through Paris, on the streets and in the Metro, as a male-nurse-in-training attempts to prevent the killing of his pregnant wife by an intent bunch of gangsters and criss-crossing squads of cops. Stakes? Oui. Think of “Hanna”‘s single-take chase and battle in a Berlin subway station extended to feature length: the action’s neatly choreographed and largely coherent, even when the plot is in jumpy conspiratorial tatters. “Run, Liam, Run” would be an apt title for a bigger-budget remake of French writer-director Fred Cavayé’s “Point Blank,” along the lines of box-office successes like “Taken” and “Unknown” starring the unlikely mid-career Irish action thespian, Liam Neeson. From the director of the very similar “Pour Elle.” (There’s no connection to the 1967 John Boorman classic of the same name.) With Gilles Lellouche, Roschdy Zem, Gérard Lanvin, Elena Anaya, Claire Perot. 84m. (Ray Pride)