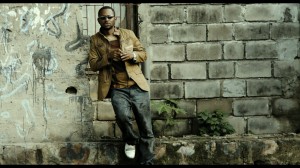 One-man Congolese film industry Djo Tunda Wa Munga’s first feature, “Viva Riva!” (Congo-France-Belgium, 2010) is a fierce and grimy crime-and-revenge thriller about a man’s return to his teeming, beatdown Kinshasa hometown with a wealth of stolen gasoline and the Angolan warlord on his trail wanting his store of fuel back. Headlong after the fashion of Tony Scott (“Unstoppable,” “Déjà Vu”), “Riva!” is skilled and brutal work built on the template of familiar Hollywood gangster movies, but its unfamiliar urban setting, akin to but not as realized as in “City of God,” and its boldly-colored backstreets and clubs elevates the predictable into the memorably pungent.The metaphor is obvious and universal: the love of fuel may kill us all. Then again, the love of movies and of the vitality of backstreets don’t necessarily require a metaphor, just the velocity of plunging, impetuous beauty. “Viva Riva!” won six 2010 African Movie Academy Awards, including Best Film, Best Director, Best Cinematography and Best Production Design. With Patsha Bay Mukana as Riva; the stunning Manie Malone as the woman that, of course, he must have; Marlene Longange, Alex Herabo, Angelique Mbumb, Nzita Tumba, Davly Ilunga, Romain Ndomba, Tomas Bie. 96m. (Ray Pride)

“Viva Riva!” is now playing at the Music Box.