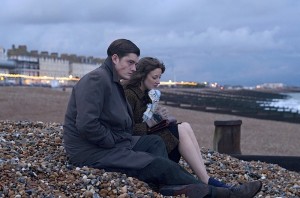 Graham Greene’s sociopath child-man thug Pinkie Brown in the terse 1938 novel “Brighton Rock” was one of the first literary figures that appealed to me as a teenager: what a dazzle-eyed soulless jab of spite the novelist wrote him as, on the page, and in the form he took as twenty-three-year-old Richard Attenborough in the Boulting Brothers’ 1947 viciously noir adaptation. Both are steeped in a particularly Catholic hell of guilt and lashing out that was wholly foreign and new to me. And the language: there’s an icy perfection to a closing line like Greene’s, “She walked rapidly in the thin June sunlight towards the worst horror of all.” The new “Brighton Rock,” uncertainly placed in a time between 1964 and the 1930s, is the first feature by Rowan Joffe, adapted the screenplay for Anton Corbijn’s “The American,” which was decorous and chilly in a more satisfying fashion. The look is beguilingly bleak, inspiring a litany of lovely words scrawled down a page to match the imagery: squalor, squalid, crusted, begrimed, smudged, cracked, broken, peeling, appalling, befogged. At first, it’s such sordid sweetness. But soon, the production design turns to phlegm: thick, choking and less than sanitary. The one antiquarian element missing is an antimacassar to keep the mind from getting quickly oily. The lighting by John Mathieson (“Robin Hood,” “Hannibal,” “Gladiator”) is heavy on fog and backlight and noir looks, but the settings and the figures in the foreground don’t fit into that era of the mods and rockers. (Call it Quadro-phony.) As Pinkie, the thirtysomething Sam Riley, glum perfection in “Control,” is pinched of face but pitiably wan and reactive.  Rose, the girl who’ll come to regret meeting Pinkie, is played by Andrea Riseborough, with sea-pale blue eyes set in a cream-and-strawberries complexion, holds the screen as well as anyone in the cast, as she did in “Never Let Me Go” and “Venus.” Helen Mirren is vanquished under a brown pelt of a wig and John Hurt boasts a splendid elder’s pompadour, wavy like Quentin Crisp. But it’s all look and no feel, all so itchy-kitschy-koo, it’s like a production reel auditioning to become a movie. There’s little melancholy or mood, just… details. Leather exists, it seems, not to clothe a horse or cow, or to furnish a room, but to allow high-cartoon gangsters in smoking jackets on fancy furniture to prompt a fancy fart of a squeak as they loll. (Andy Serkis, the gangster in question, lolls lavishly.) With Nonso Anozie, Sean Harris, Steven Robertson, Steve Evets, Adrian Schiller, John Warman. 111m. Widescreen. (Ray Pride)