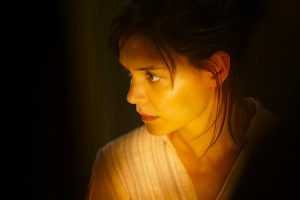 One scary night in Rhode Island back in the horse-and-carriage day, a wildlife painter on par with John James Audubon takes hammer-and-chisel to the teeth of his maid. If he supplicates the diabolical fairies dwelling in the ash pit under the basement, they may unhand his eight-year-old son. (He already made a sacrifice of his own teeth to no avail. )The manic, furry, screechy little supernatural monsters drag the painter into their abyss beneath Blackwood Manor. This prelude to “Don’t Be Afraid of the Dark” sports a mastery of horror tropes. The opening credits are great, too. But the rest, set in the present and shot in Melbourne, is not up to par with earlier work by co-writer, co-producer and creature-voicer Guillermo del Toro (“Pan’s Labyrinth”). He does, however, modify the 1973 ABC-TV original by adding to the plot one of his signature little girls. First-time director and comic-book illustrator-writer Troy Nixey takes a traditional approach in relating the restoration of the Emerson Blackwood estate by architect and divorced dad Alex (Guy Pearce) and his sweetheart and designer Kim (Katie Holmes). Alex’s little daughter Sally (Bailee Madison) arrives from L.A. with mommy issues and a bottle of Adderall. “If we get the cover of Architectural Digest, we won’t have to take out another bank loan,” says stressed-out Alex. Pouty Sally, who draws a lot of spirals, is drawn to the whispery voices behind the bolted iron grate in the secret basement. These “homunculi” of “an ancient race” are not really age-appropriate playmates with safe toys and nice teeth. A local librarian name-drops Welsh author Arthur Machen, who wrote of aboriginal goblin miscegenators and “horrible little stunted creatures with old men’s faces,” but “Don’t Be Afraid of the Dark” makes little of the relevant Victorian lore of “little folk” suspected of stealing children. One weak element is little Bailee, despite co-star Pearce gushing about her precocious acting chops in the press kit: “She’s like a little old lady!” With Julia Blake, Jack Thompson, Garry McDonald, James Mackay. 100m. (Bill Stamets)