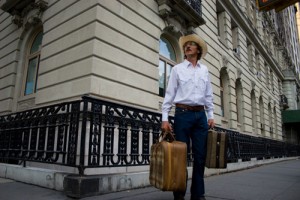 In its first three minutes, Chris Ordal’s “Earthwork” combines dearest clichés with something marvelous: a child urging slippery hornrims back up his nose creates a thing, something, amazing, out in the backyard of the family farm, and his parents look out the kitchen window, acting uncertain. “What is he up to?” Mother says with wonder. “I don’t know,” Father says with blasé certainty, “Sumthin’.” That sumthin’ they see is an early try at the artwork of the title, a boy’s-own scene of domestic life on a Kansas countryside that can only be fully seen from the sky above. All growed up, this Stan Herd, he’s smilin’ and pushin’ aviator glasses up his nose, still the boy he was and will always be. Rain, smells, sunflowers, soft light, as many smiles as you’d see in a lonely child in a roomful of kittens: this must be the formula for this real-life “crop artist” to create his naïve canvases from rude earth and junk. “You’ve opened my iris!” a photographer who choppers into Lawrence to see his work tells him, becoming a proponent of his work. I’ve never seen Hawkes give a performance of such simple-minded earnest goodness and naïveté and, while keen, empathetic and genuinely likeable in its gentle nuances, it hardly matches what he’s capable of in movies like “Winter’s Bone” and especially his silkily sinister turn in the forthcoming “Martha Marcy May Marlene.” There, it’s simmer and suspense, here it’s wide eyes and wider grins. The story’s set in the 1990s, and Herd brings his large-space temporary work to Manhattan, to be built on vacant land owned by Donald Trump, whose name, with its freight of ego and vanity curdles this gentle attempt at understated, kindly latter-day Americana even before plot complications kick in, with all the force and logic of an angered mule. Graffiti artists and squatters on the land are part of the local color which Herd wide-eyes, as well as interiors that look suspiciously unlike Manhattan and more like Kansas. Herd’s own work is an eyeful at the end credits. With Bruce MacVittie, Zach Grenier, Sam Greenlee, Laura Kirk, James McDaniel, Chris Bachand, Scott Allegrucci. 93m. (Ray Pride)