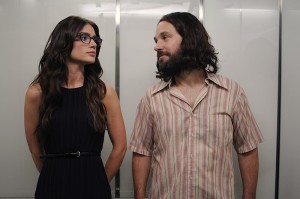 A comedy about a lovable dummy or uplifting fool typically packages condescending mockery with moralizing that condescends too. To its credit, “Our Idiot Brother” decently treats its characters and audience to homilies about telling and living the truth. There’s a good-faith effort afoot to laugh at the title’s innocent idiot Ned (Paul Rudd) and his three smarter if insincere sisters (Emily Mortimer, Elizabeth Banks and Zooey Deschanel). Ned is a chronic embarrassment. After stupidly selling pot to a policeman in uniform, he gets out of prison. He finds that his organic girlfriend on Long Island no longer has room for him in her arms or on her farm, so he decamps from sister to sister, passing through the careerist scenes of the West Village, Park Slope and Bushwick. All three sisters are making it, more or less, through lying to themselves and others. Everywhere he goes, Ned haplessly triggers calamities through his honesty. Ironically, his slow-fuse outburst against duplicity explodes in a family gathering during a game of charades. Jesse Peretz directs a screenplay by his sister Evgenia Peretz and her husband David Schisgall. One of their producers claims, not so plausibly: “The story behind this movie is age-old. You can go all the way back to Cain and Abel: Cain and Abel is essentially a story about the ‘idiot brother.’” If Ned would never utter that inanity, nor would he insult you for saying it to hype his film. With Adam Scott, Hugh Dancy, Steve Coogan, Kathryn Hahn, Rashida Jones, Shirley Knight, Matthew Mindler. 90m. (Bill Stamets)