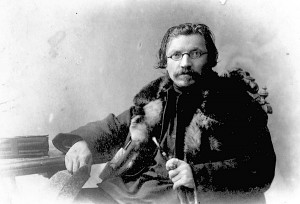 If you don’t know the name in the title, “Sholem Aleichem: Laughing in the Darkness,” it’s less than a minute before footage of Topol in the film of the musical of “Fiddler on the Roof” catapults onto the screen. But Solomon Rabinovitch, whose adopted pseudonym and persona basically translates as something like, “How ya doing!” has a richer, denser legacy, which director Joseph Dorman conveys zealously. For instance, he was a master of Yiddish language, and Aleichem’s use of its “portable homeland” is capably conveyed. He wanted to be “the designer of modern Yiddish literature,” using the polyglot amalgam of Hebrew, Polish, German and other languages the way like Shakespeare, one witness suggests. “He saw where Jews were going, but he knew where they came from,” Aaron Lansky, director of the National Yiddish Book Center, observes on camera: he knew his audience, but he knew the village life of the shtetl that had been left behind in Eastern Europe. Stills and archive materials swoop and carousel past in the crisp, handsome production, which also includes narration drawn from his hundreds of stories. Notably, Aleichem had one of the great funerals of the century, as hundreds of thousands turned out in the streets of Manhattan. From the compelling evidence of “Sholem Aleichem: Laughing in the Darkness,” it’s easy to see why. Narrated by Alan Rosenberg. With Dan Miron, Hillel Halkin, Bel Kaufman, David Roskies, Ruth Wisse and the voices of Peter Riegert, Rachel Dratch, Jason Kravits, Daniel Lerman. 93m. (Ray Pride)

Sholem Aleichem: Laughing in the Darkness – Trailer from Riverside Films on Vimeo.