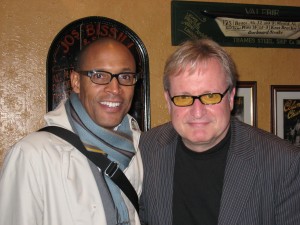 Twenty years ago, John Davies got his first job as a producer working on Siskel and Ebert’s “Sneak Previews.” This month, his documentary “Phunny Business” will premiere at the Gene Siskel Film Center, a fitting return to the Chicago film scene.

The documentary focuses on All Jokes Aside, a South Loop comedy club that helped launch the careers of celebrities like Jamie Foxx and Chris Rock. Davies first encountered the club when he visited Chicago to run a charity event at the venue and was invited to see the normal show by owner Raymond Lambert. “What I saw that night stuck with me,” he says. “It was a really interesting club doing a different kind of comedy.” The audience and talent at the club were primarily black, and Davies was fascinated by the culturally different but high-caliber comedy. Years later, he reconnected with Lambert and learned that the club was forced to close after its attempts to move to a North Side location were blocked. “The more we talked the more I thought it was a great story,” he says. With Davies’ experience, Lambert’s connection to the comedy scene and the post-production facility of Reid Brody, the documentary came together.

The film has been well received on the festival circuit, and Davies has been encouraged by the reactions of his audiences. “There are lots of laughs,” he says. “It’s a funny, sad story when you realize Ray’s efforts were thwarted. You feel badly for Chicago, a little ashamed. But primarily it’s a funny, inspiring story.” (Erin Kelsey)

“Phunny Business” plays at the Gene Siskel Film Center as part of the Black Harvest International Film Festival on August 27 and September 1. Tickets available at siskelfilmcenter.org. Further information at phunnybusinessmovie.com.