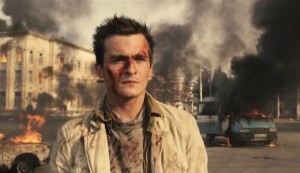 If your usual news outlet skips one of the world’s smaller wars, you can look for an action film that puts war reporters in that very hotspot. “5 Days of War”  is set in August 2008, when Russia invaded the Republic of Georgia. A producer in New York City explains why her network is hardly covering this: the Olympics open in Beijing in that news cycle. Renny Harlin (“Die Hard 2”) directs a flat, if fact-based screenplay by Mikko Alanne and David Battle about Thomas Anders (Rupert Friend). A weak performance in a weak role makes this a lesser entry in the busy war correspondent genre. There are the obligatory hard-drinking colleagues in the hotel bar, the kind of cynics who note that Rwanda lacked oil, so their editors deemed it less than newsworthy. Anders’ backstory: one year ago, he failed to save his lover during an ambush in Iraq. Now he is keen to save a young Georgian woman. There is little more to his emotional make-up. The geopolitical detail is minimal. The baddest of the bad guys is a mercenary ethnic-cleanser who identifies himself as a Cossack. The plot centers on uploading video of atrocity to outrage the world. “No one cares,” reports Anders’ contact at his network, while his cameraman insists audiences need a human story in order to connect with the faraway tragedy. “5 Days of War” never grasps that. At the end, nineteen Georgians of various generations pose before a black backdrop to testify about loved ones. Harlin bets on bang-bang, thanks to the cooperation of three branches of the Georgia military, before putting us face-to-face with civilians. With Richard Coyle, Emmanuelle Chriqui, Andy Garcia, Johnathon Schaech, Rade Šerbedžija, Mikko Nousiainen, Val Kilmer, Heather Graham. 113m. (Bill Stamets)