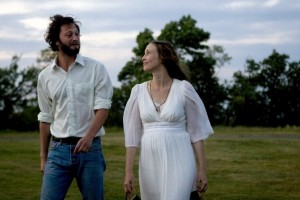 Vera Farmiga directs a thoughtful look at faith in her affecting fictionalization of Carolyn S. Briggs’ 2002 memoir “This Dark World: A Memoir of Salvation Found and Lost.” “Christianity is the ‘location’ of the film, not the subject, concern, or issue,” notes Farmiga, who plays a Carolyn-like character named Corinne in a screenplay by Briggs and Tim Metcalfe. In the early parts of “Higher Ground,” Corinne is played by McKenzie Turner as a girl, and by Farmiga’s much younger sister Taissa as a teenager who gets pregnant by her boyfriend Ethan (Boyd Holbrook). She wants to be a writer. He fronts a rock band. Corinne’s turn to Christ begins in Bible school, and deepens after nearly drowning with her husband and baby in a van crash. Baptized in a river, Corinne joins a young congregation. She befriends sister congregant Annika (Dagmara Dominczyk) who is more sexually satisfied and spiritually fulfilled. Corinne envies her ability to speak in tongues. Their elders prefer the menfolk to speak in church. She is cautioned against trespassing by “preaching.”  A marriage counselor had warned her about “worshiping at the altar of yourself,” yet Corinne sacrifices her marriage to find her own path. Dogs appear in a late scene for a sublime marker of her calling. With Donna Murphy, John Hawkes, Nina Arianda, Joshua Leonard, Bill Irwin. 109m. (Bill Stamets)