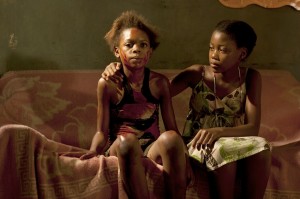 Rumors run riot in a village near Johannesburg to the pain of twelve-year-old Chanda (Khomotso Manyaka). South African director Oliver Schmitz (“Mapantsula”) directs the distressing drama with an assured hand, and the performances by his child actors are immaculate. What appears at first a hearty lashing of picturesque miserabilism or a catalog of terrible suffering and societal ignorance, involving death, disease and child prostitution, becomes engaging drama. It’s a downer, to be sure—AIDS is everywhere, misunderstood, hated, thought of as a curse or witchcraft, withering, killing—but the determination of his characters means “Live, Above All,” a gorgeously shot digital descendant of neorealism’s urges, never turns to despair, and its conclusion is so weirdly uplifting, you’ll either thrill or recoil. Desolation, despair, ruin and the impossible, nourishing sunlight of a child’s smiling face. 106m. (Ray Pride)

“Life, Above All” opens Friday at the Music Box and Landmark Renaissance.