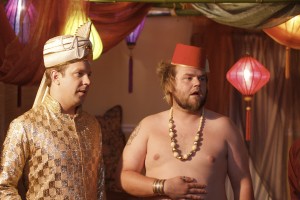 No matter how many times you murmur or bark Dorothy Parker’s deathless, “What fresh hell is this!” in whatever tone of voice, it’ll never be enough. It’s such a satisfying phrase, even in the face of shock or suffering.

I’m shell-shocked by truly bad movies as they unspool before me: I don’t react in anger or contempt, but turn quickly numb. I’m confused by ineptitude. Why are you making a movie if you don’t know how?  It’s a strange reaction, I know, but I think it comes from my small-town upbringing where an LP was an LP, what was on television was television and a book was a book. All were objects, all were experiences, all were equal. Records looked good under the record player, books looked good in a row on the shelf. It’s not the same as the reflex against throwing any book, however bad or worn, into the trash: it was a simple, homespun belief that there was no such thing as “bad”: the cultural artifacts were sacred in their own small way. My grade school library held the castoffs of a teaching college that had closed in 1926, so that attitude wasn’t entirely a bad thing: I would discover a book like Thomas de Quincey’s “Confessions of an English Opium Eater” in fourth grade while hiding in the stacks from the likes of “Dot the Bunny.”

“Don’t you guys remember the article my mom clipped from the New Yorker?” is the height of other cultural references.  One character awaits the latest release of the BlackBerry and others carry cell phones as heavy as the jokes: it’s strange how such a small, wrong detail can add to the confusion. (That and characters who do absinthe “flown in from Amsterdam” as shots.)  Shot in 2008, “A Good Old Fashioned Orgy” literally looks dated, as if the film stock itself had been neglected and browned. How advanced is the comedy? There’s not only a joke dissing dentists, but another one—rimshot!—taking down a podiatrist.

The characters are consistently, unapologetically awful: “The Best Years Of Our Lives” would be an equally apposite title. How advanced is the raunch? Not so much: it’s mostly juvenile verbiage the performers fail to wrestle to the mat. Not only do these filmmakers seem never to have seen a film, they don’t seem to have ever fucked. Unless you count the lasting flash of Farrelly stalwart Lin Shaye clad in leather and wielding a strap-on to peg a pudgy pale man-ass draped over a red exercise ball in front of her at a swinger’s night in the backroom of a mattress store. “I felt bad for your little butthole there for a moment” is the later, callback gag to that moment. Still, I think the ever-smiling Leslie Bibb, as one of the world’s worst realtors who would brighten any fresh hell, sums up the movie nicely with her chipper delivery of “Hey! What’s up with all the dildos?”