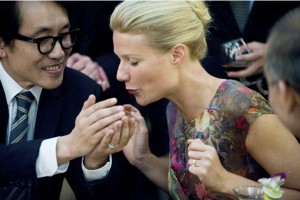 And so the world ends, not with a bang but with a touch. However it’s seen—a bookend to the nihilist ending of summer hit “Rise of the Planet of the Apes,” a planetary “Poseidon Adventure” with an all-star cast helping us tell a vast number of roles apart, or a process piece, an “All the President’s Men” of pandemic preparedness—”Contagion,” Steven Soderbergh’s twenty-third film since 1989, is a corker of dread.

Working again as his own cinematographer, from a dense yet speedy script by Scott Z. Burns (the screenwriter of “The Informant!”), Soderbergh shoots in largely natural light with a diminished color palette, whether in Chicago or Kowloon, London or Atlanta, San Francisco or Geneva. Overcast, low-ceiling clouds, the slow fall of dusk or the crack of dawn: man sniffles under the cover of late-fall-early-winter seasonal gloom.

But the mood, the affect of “Contagion” is a different sort of elegy, not mournful, yet accepting of the possibility, plausibility and even certainty of massive social tremors and upheavals. Flu, weather, warming, water: “Contagion” could have taken off from any number of threads about the delicate filaments of global commerce, it could as well be a movie expanded from the germ of Nestlé’s CEO saying this weekend that the planet’s water must be turned into a for-profit commodity as quickly as possible.

The film opens with Gwyneth Paltrow in an airport lounge, fingers in a dish of bar nuts, saying into her phone, “If I don’t get to see you again…,” a line as resonant, as ominous, as something in an Alain Resnais time-cracker. It’s a bruise of a thought even before we know the characters or the stakes. “If I don’t get to see you again” is also queasy-making with the timing of “Contagion”‘s release, the weekend before the tenth anniversary of the 9/11 attacks. Somebody’s gonna write the essay, judging that decision to be a colossal moral faux pas, to suggest those 2,982 lives pale against pandemic’s potential of tens of millions. An inexpert “expert” character wonders at first if the bits of information popping up on the internet from all around the globe could be just a cruel “art project,” lightly echoing the inflammatory remarks Karlheinz Stockhausen was censured for after 9/11.

Traditional antagonists are elusive in a movie less concerned with “bad guys” than the vulnerability of remote forests; the delicacy of society’s strands; the transmission of fear. Jude Law, brandishing busted dirty clotty choppers, plays a San Francisco blogger who barks lines like “Print is dying,” to newspaper reporters and gets all the most convincing lines about the economics of shock-doctrine-style reactions to tragedy, much the way a drug user gets to assert more thesis than the head of the DEA in “Traffic.” The doctors and epidemiologists—the likes of Laurence Fishburne, Kate Winslet, Jennifer Ehle, Marion Cotillard—are noble, good, well-meaning and, even for a moment, flawed.

Soderbergh’s restless narrative economy extends to the dialogue, reduced, for the most part, to satisfying gnomic couplets: “Should I call someone?” “Call everyone.” Personal details or backstory are jettisoned in favor of the larger canvas: show the spread, and find an individual who freights the virus from its first infection to a specific city across the span of the globe. Explanations of the emerging science over the days of the story are aphoristic, with the sort of snappish sarcasm heard between professionals, although a virologist played by the great, ever-louche Elliott Gould does get to assault Law’s blogger with the words, “Blogging isn’t writing, it’s graffiti with punctuation.”

“Contagion”‘s ad campaign accentuates the implications about the dangers of things that go “viral,” such as rumor and insider information. The rate of transmission by the internet is far faster, faster than the warning, “In a few days, this will be tweeted and YouTubed across the world!” Seconds, friend.

Intermittent narration that ties the progress of worldwide crisis has the timbre and studio sound quality of an NPR broadcast instead of the usual television bites: the hushed professionalism is far more ominous than cable news tumult. Cliff Martinez’s music functions largely as pulse, goosing the goosebumps, then as threads of the causation converge, resembles the elevated cocktail music of a 1960s caper. It’s effective.

But it’s the cumulative horror, the loss of personal control, the loss of faith that seeps through. The world, still walking, not knowing where. “Optimistic yet resigned” is one way to describe the tone. At one point, there’s a montage that ties everything together in graceful understatement yet also with the amoral force that is nature: as a doctor says earlier of the newly spliced virus, “Somewhere in the world, the wrong bat met the wrong pig.” The closest thing to sentimentality in “Contagion” comes in a family scene toward the end, but it’s swiftly undercut by the movie’s chilliest and most inspired scene: all the questions the world wanted answered are demonstrated, swiftly, vividly, viscerally, ending on a simple touch, as brief as photos. This is how the world functions, deny it or not.