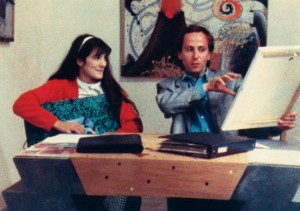 My memories of Eric Rohmer’s “Summer” (The Green Ray) are muddied by all the years since I saw it last, but the cries of “masterpiece” that greeted the debut of its fresh 35mm print in Manhattan make it even more of a must-see in this week’s Siskel revival. While that print wasn’t available, its companion, “Four Adventures of Reinette and Mirabelle” was, and I knew next to nothing about it. It was a rare pleasure to treat it like it was the opening day of a film the late director had only just completed. (It was made in 1987 alongside “Summer.”)  Rohmer’s approach to shooting on 16mm ranged wide, depending on his cinematographer, and “Four Adventures” tends to the graininess that comes from largely using natural light. (Some of his scenes, including a search for a minute of “the blue hour” just before dawn, have a pleasing, luminous murk that suggests he would have made a fine young filmmaker with modern digital tools.) City mouse meets country mouse: brunette Mirabelle (Jessica Forde) stops her bicycle by the side of a country road, green grass on either side of her. The image is plain: a red sweater’s knotted over her shoulders, she wears red socks, her bicycle pump has a red tube. She extracts and holds up the inner tube: a perfect circle. The film’s just betrayed its shape, and in color design, offered up the hue of the high flush of twentysomething cheeks. (Prestidigitation!) Equally brunette Reinette (Joëlle Miquel) approaches, offers help, talks ten kilometers a minute, invites her into her lovely but tumbledown stone-barn-turned-home nearby. Reinette’s maddening, but Rohmer’s wearing us down: Miquel finds her character’s vulnerabilities soon enough, and Forde’s fully compassionate gaze is exquisite even in the face of freighted illogic. As they await that moment of “blue hour,” Rohmer shoots the two women from behind, white night shirts silhouetted against blue night, clouds in distance suggesting stands of trees, a composition that Henri Rousseau would have approved of. (This print is lightly spackled during the deep blue scene, but the effect is as if fireflies had found the girls.) Reinette’s bangs and Mirabelle’s ankle-cropped pants, along with a range of sneakers and espadrilles worn by both characters, look weirdly contemporary, although everyone else’s hair is as 1980s as a couple of charmingly mediocre pop songs we hear. Once they reach Paris, the pair meet a bestiary of aggravating modern figures, including Fabrice Luchini as a pluperfect passive-aggressive gallerist and Philippe Laudenbach as an illogical, rude café waiter who would have amused Lubitsch as well as Chico Marx. A bizarre act of charity in a supermarket demonstrates, as if it were needed, the range of Rohmer’s gifts for dramatizing a moral quandary, and the film’s last line is a deft, exquisite punchline, as modest and assured as the rest of this great delight. With Béatrice Romand, Marie Rivière. 95m. (Ray Pride)

“Summer” and “Four Adventures Of Reinette And Mirabelle” open Friday at Siskel in 35mm.