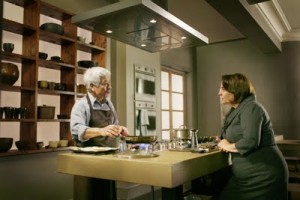 Ever-adroit actor-writer-director Josiane Balasko is the moral center of a French fairytale with elements intriguingly similar to summer hit “The Help.” Adapted from Muriel Barbery’s internationally best-selling novel “The Elegance of the Hedgehog” (aka “Le Herisson”), writer-director Mona Achache parallels the lives of two women: the concierge of the well-heeled Art Deco Left Bank building where the stories unfold, middle-aged grump-and-frump Renée (Balasko), and ten-year-old-going-on-screw-you Paloma (the emetic Garance Le Guillermic), who wields a Hi-8 camera and suicidal wishes with equal bluntness. Renée’s private, secret life as a bibliophile and her love of finer chocolates are slowly revealed, to the detriment of Paloma’s cooing and the benefit of this sometimes-daffy, sometimes-jewel box of a movie. The appearance of a Japanese gentleman, Mr. Ozu, brings more grown-up stuff to the table while also supping at the shores of “Beauty and the Beast.” (Our quiet concierge knows enough to ask if he’s related to Japanese film master Yasujiro Ozu.) Gabriel Yared’s score adds to the storybook mood. Talking to Balasko during the recent French Film Festival at the Music Box, she admitted that she enjoyed weighting herself down with blah clothes and a heavy wig: like Peter Falk, stepping into the shoes of someone else is one of her earliest joys in shaping a role. Renée’s transformation under the eye of Mr. Ozu was surely another joyful experience. 95m. (Ray Pride)

“The Hedgehog” opens Friday at Landmark Century. A trailer is below.