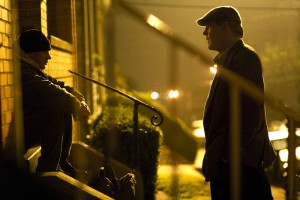 Invoking “Moby Dick” in its first moments as elder slab of beef (or ham) Nick Nolte listens to a Melville audio book and name-checking Greek mythology along the way, Gavin O’Connor’s “Warrior” pits a pair of estranged brothers from Pittsburgh, Tommy and Brendan (Tom Hardy, Joel Edgerton) against each other and their recovering alcoholic father (Nolte)—”I’m coming up onna thousand days”—against the backdrop of a mixed-martial-arts winner-takes-all event. (How’s “Sparta” for a spring-loaded name?) O’Connor finds the heart and soul of a potentially preposterous premise with the same offhand skill as his Olympic hockey tale, “Miracle.” Reportedly, he had a year to shape the film in the editing room (rather than the customary three months or less on modern studio features) and the investment shows in scenes involving the slow burns of taciturn men and the quick violence of men consigned to a cage. It’s surging melodrama all the way, including a component of the story that very literally works war into the story’s unfolding: this is not “The Best Years Of Our Lives,” none of ours. The fights aren’t choreographed in omniscient fashion, but jumbled, seen from both inside and outside the cages, but the visual choices are dynamic and the choreography slammingly convincing. Other decisions are interesting in what material is left out: the family mano-a-mano-a-mano is emphasized to the point of eliding explanations, and indeed, any extended looks at how the father trains his chosen son. Hardy plays his role profoundly marble-mouthed; Edgerton a compassionate squint writ large; and Nolte gargles his way through, a tender thick high-grade pork belly of a performance. (What is the net weight of a single Nick Nolte tear?) The forces that push schoolteacher Tommy to the wall are fully filled in, though, with Noah Emmerich ably embodying a thieving bureaucrat of a banker determined to repossess the family house through repeated legerdemain and lies. It’s a matter of life and debt for all three men: forces inside and forces out demand to be repaid. It’s a familiar weave, but it’s fine fabric. (The line “I remember him being very unmemorable” does not apply to the film itself, even with the modern monochromatic color palette that extends from poop to pee with intermittent bursts of soot.) The extended running time is hardly noticeable, a tribute to the story’s assured pacing, of moment, if not of monumentality. With Jennifer Morrison. 139m. (Ray Pride)