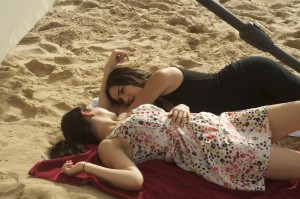 Tehran’s screens do not sanction erotic caresses between sixteen-year-old women who are not only uncovered but unclothed. “Circumstance” is an Iranian film in the sense that it is set in Tehran. But it was shot in Beirut, and its cast has roots in Iran, and it differs from those films made-in-Iran that screen internationally, if not in Iran. Writer-director Maryam Keshavarz, who studied Comparative Literature at Northwestern and Film Direction at NYU, here scripts the teen rebel line “Fuck the mothers of the mullahs who shit all over this country,” followed by her toast “to Hollywood.” Atafeh (Nikohl Boosheri) and Shireen (Sarah Kazemy) are schoolgirls with active imaginations. They hit the underground party scenes that get raided by the Morality Police. Jafar Panahi depicted the same tensions between the privileged and puritans in “Crimson Gold” (2003.) Atafeh’s older brother Mehran (Reza Sixo Safai) comes home from rehab. He turns down a music university job arranged by his well-connected dad, a former revolutionary. The “prodigal son,” as he is greeted, gets seriously religious. His video surveillance of civic deviancy focuses on his own family. He leverages a split between his sister and her lover. Besides making impressive choices in her first feature’s scoring and tonality, Keshavarz nods to Iranian cinema’s signature reflexivity with a scene that’s all about “Circumstance” itself: cultural outlaws try to dub both “Milk” and “Sex and the City” into Farsi for a double-feature DVD. Fuck Tha Gasht Ershad! Winner of the 2011 Sundance Audience Award, “Circumstance” is a humanist lyric to freedoms that Voice of America could transmit toward Tehran. With Soheil Parsa, Nasrin Pakkho, Amir Barghashi, Fariborz Daftari, Keon Mohajeri. 105m. (Bill Stamets)