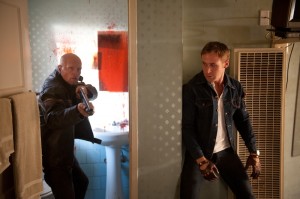 After a career that’s seen ups and downs—the forty-year-old Danish director made the violent “Pusher” crime trilogy—he’s content with his ongoing partnership with actor and longtime Los Angeleno Ryan Gosling as an “up.” The action filmmaking of “Drive” is fluent, patient, then torn with sudden bursts of violence. Like turning a sentence that lands just so, his film grammar’s good, assured: then the careening physics of suddenness.

He cites “Drive” as the end of another trilogy, including prison fantasia “Bronson” and Viking freak-out “Valhalla Rising.” “It’s all about transformation,” he says, clipped, calm. “With ‘Bronson,’ a man transforms in his own fantasy. In ‘Valhalla Rising,’ a man transforms himself through man’s evolution. And in ‘Drive,’ a man transforms himself from human being to hero.” In many other interviews since the film’s Cannes debut, he’s described “Drive” as about a guy who drives around listening to pop music because it’s the only way he can feel. (Three or four pop songs in “Drive” play from start to finish, which pleases him immensely.)

Using Arri’s new Alexa digital camera on locations and practical sets, Refn creates multiple planes of color and light in every scene: a fiery but serene dream of a strange and diverse city. Refn’s brimming eyeful is rife with other filmmakers’ influence. Kenneth Anger’s “Scorpio Rising” and “Pretty Woman” are two predecessors he cheekily suggests, and one of the film’s dedications is to Alejandro Jodorowsky. Refn’s self-aware. The film’s antagonist is a gangster inhabited by Albert Brooks, who’s had money all over the place, he says, including movies: “One critic called them ‘European,’ I thought they were shit.”

Influence: There’s the shimmering surfaces and color-coding of Michael Mann. John Boorman’s “Point Blank” (the city seen by a Brit in 1967 like the city framed by a Dane in 2011) or Robert Altman’s cracked Raymond Chandler telling, “The Long Goodbye.” Kubrick’s omen-laden corridors. Jean-Pierre Melville’s laconic men, taciturn to the brink of schizophrenia. There are surely dozens of others.

The unnamed driver (Ryan Gosling) meets a young mother (Carey Mulligan) in his picturesquely shabby apartment building, where he’s behind the door of apartment 405. (The film pops with small jokes like the name of Los Angeles’ most over-crowded freeway.) It’s the small, tingling grace notes that elevate “Drive” into what Refn claims it is, or the cinephilic repository that it also is, such as the first meeting of the man and woman in the building’s elevator, two unmatched gazes, seeing, not seeing, each other. And once they’ve met, when she asks where he works and he answers, “Reseda Boulevard,” and Gosling stretches those syllables into something abstract and lyrical along his tongue and in an ideal cut, Refn cuts to Mulligan indicating, yes, in this very second she may have well opened up to the possibility of loving this man.

The sound is markedly stylized. “Design-wise, everything had to be very contrasted,” Refn says. “So each room has its own individual sound. There would never be a design that would perfume it. Once you go in one door from another door”— he slaps his hands—”There’s a cut into sound. That’s what always throws people off emotionally where they are [in the story].”

There’s a moment when the Driver first begins to coil, to move toward violence to protect those he loves, and for the first time, we hear the sound of his driving glove as he flexes it. It’s loud, it’s almost the only sound on the track. “They were heightened a lot. I did a lot of Foley [sound design] on those hands. I like the fetish leather.”

A key inspiration, he says, was Sergio Leone. “Leone used it a lot. He would always heighten everything in his Westerns. It always kind of engaged me so much more, because the details are so minimalistic but the impact is so enormous, because it’s like a piece of music, specific sounds that keep repeating themselves. And all the sounds are interesting. Like the tightening of the leather gloves indicate a man who’s tense.”

Based on a fine, terse novella by James Sallis, “Drive” then took six years and multiple drafts by Hossein Amini (“Wings of the Dove”) and then collaboration with Gosling and Refn to become the sleek ride that it is today. “Balance,” he says. “Everything, essentially, in the end, needs a director. Film is a director’s medium. Good film’s made by a good director, bad film’s made by a bad director. Marketplace only reacts to what’s good and bad. There’s no longer a formula. Yes—good films.”

Quality! Who would’ve guessed!  I joke.

He laughs, shakes his head. “One word.”