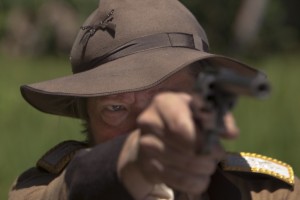 “Amigo,” John Sayles’ war epic produced on the movie-budget-equivalent of one thin dime, is another earnest both-sides-now slice of American history from one of our most thematically ambitious directors. The novelist-writer-director’s seventeenth feature since his 1980 debut, “The Return of the Secaucus 7,” is set in a village during the 1900’s Philippine-American war, a U.S. imperialist venture in the first heyday of the yellow press; mayor Rafael Dacanay (local superstar Joel Torre) has to examine his beliefs when U. S. troops shelter in his town, led by Colonel Hardacre (Chris Cooper). (The mayor’s brother leads the rebels.) A Spanish friar (Yul Vazquez), charged with translating, adds his own spin to the complications between reluctant locals and the invading forces. Of his intentions, Sayles writes, ” The Philippine-American War has been ignored or forgotten by both sides of the conflict, it is history that needs to be recaptured in the public imagination. ‘Amigo‘ deals with one of the most common but least-examined aspects of human experience—the story of the people caught in between.” Set at the turn of the past century, like his current novel, the almost-1,000-page “A Moment In The Sun” (McSweeney’s), “Amigo” functions as both blunt history and as a shining mirror on the eternal conflicts countries put themselves into. And as an exemplar on aspiration on the smallest of budgets, Sayles has no rivals for making talk, talk and talk the least expensive of special effects. But what talk: the quiet current beneath it all is how each of the factions fails to communicate, nests within a closed system, repels interaction with the larger world, even between neighbors just down the muddy path. With Joel Torre, Chris Cooper, Garret Dillahunt, Yul Vazquez, Rio Locsin, DJ Qualls. 121m. (Ray Pride)