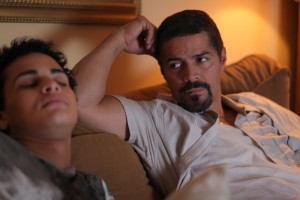 At once violent and reserved, Rashaad Ernesto Green’s “Gun Hill Road,” the debut writer-director’s thesis film at NYU, supported by a scholarship from Spike Lee, one of his professors, veers from the blatant to the oblique. After three years in prison, Enrique (Esai Morales) returns to Gun Hill Road in the Bronx to discover his wife (Judy Reyes) in an affair with another man and his teenage son Michael (Harmony Santana) a transvestite performance poet making not-so-tentative moves toward becoming a transsexual. Kissed crucifixes abound but at least no one falls to their knees in supplication in confessional before an altar. This movie’s many worlds’ distance from another blunt New York filmmaker, Abel Ferrara, and his soulful mayhem, where the id explodes and smears at will, but Green’s after something else, something simmering. “Gun Hill Road” implies a cycle of violence, but also a cycle of sexuality off the norm, and while a lack of speechifying is good, the central yet unexplored question is whether Enrique’s hatred and rage are nurtured from being raped in prison. The opening scene is an unexplained attack by Enrique on another prisoner that lands him in the deep, dark hole for days; the two men cross paths with consequences back in the world. And, the first time he and his wife have sex after his release, Enrique studiously, rhythmically resists the touch of kiss: a prison-styled hint of the “cowboys don’t kiss” commonplace. It’s the brooding heart of the narrative, however many peek-a-boo glimpses there are of transsexual performer Santana dolling up, primping or gawping in pain in an extended take of being dispassionately fucked by a homophobic black man. Morales’ emotional heft as the sexually conflicted ex-con, surely to be sent up again, keeps “Gun Hill Road” out of the exploitation bin. Still, the unresolved implication of causality between the father’s pain (or closetedness) and the son’s life remains a dip into murky waters. With Isiah Whitlock, Jr. 86m. (Ray Pride)