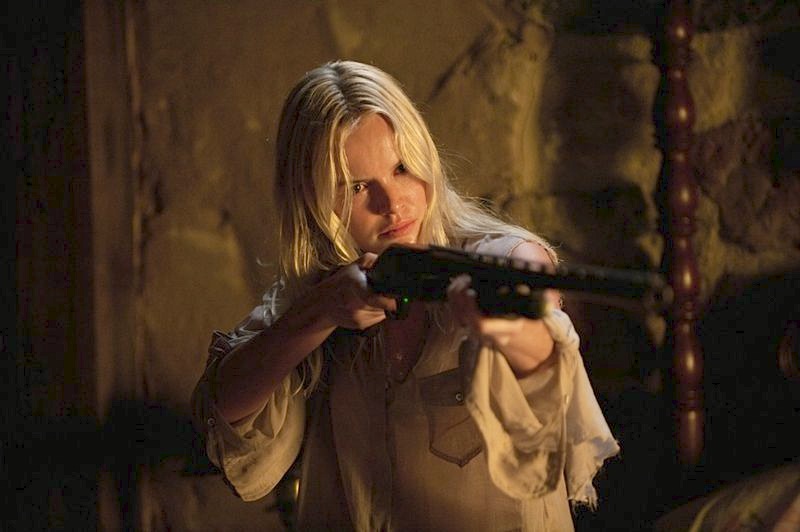 “It is hot, even for here.” Reformed film critic Rod Lurie’s sixth feature as writer and director is a seesaw of pulpy fury and blunt bunkum. A Mississippi-set remake of Sam Peckinpah’s 1971 “Straw Dogs” (which starred Dustin Hoffman as a mathematician and Susan George as his English wife who aggravate a small English village with their presence and which Pauline Kael tussled with forty years ago as “a fascist piece of art”), it’s a curious, unconvincing effort that resolves as not-so-grand guignol. The piercing tension of Peckinpah’s original isn’t surpassed.

A near-fatal miscalculation is James Marsden’s performance as David Sumner, a screenwriter immersed in completing a sprawling Hollywood epic about the Siege of Stalingrad, who brandishes a Harvard Lacrosse t-shirt as if it were the sheepskin itself, and whose every word is plummy, self-satisfied, superior, condescending. Marsden’s dancing eyes practically patronize his leaping cheekbones and protruding eyeteeth. Uptight and unsympathetic, the character is intractable as a middlebrow wannabe-hipster who is valiantly, decisively uncool and unfunny. What does it mean to him to “be a man”? The question is more, what does it mean to come across as even human?

Kate Bosworth is another matter as his wife Amy, the local cheerleader come back South, her lightly freckled features and markedly mismatched eyes gentle until the steel behind her perkiness rises urgently to the surface. (The rape scene from Peckinpah’s original eliminates a controversial note of ambiguity and, as in the original, Amy does not tell her husband what happened.) David explicates the title at pedantic length, after which Amy says, “Those ‘straw dogs’ were practically licking my body outside.” “Maybe you should wear a bra,” David simmers as Bosworth’s Tuesday Weld bloom transforms into something harder. “Are you saying I’m asking for this?” is her declarative follow-up. (Later, Lurie sets a bowl of quavering milk in frame beside her tan thighs.)

Physically, Bosworth’s is an impressive performance, where consensual teasing that’s kittenish congeals at repeated rebuffs from her increasingly indifferent husband. With native instinct, Amy dresses in tops and shorts for the swelter, best described as “rompers,” as if she shopped at Lolita-on-the-Square. And Bosworth’s quirky delivery of lines like, “Honey, you know a lot, but you don’t know shit about Southern daddies and their daughters,” hits unexpectedly telling notes.

The town’s called Blackwater, and local worshiped-above-God football team Bengals’ paw-print insignia matches that of the notorious mercenary group that provides security to the United States and other concerns in the Iraq war. (Hmmmmmmm…) The establishing shots of small-town iconography are rich, at least until the first characters enter, biting down surgically on nubby black cheroots. They aren’t rednecks, they’re not representative of any group but themselves, a viperous clutch of straggly, pissed-off savages, a sweaty patch of roadies gone wrong, hangers-on to the world’s worst jam band. Out in the woods with a band of hunters, David is asked why he’d spend his time writing a movie about “Russkies.” “I prefer to think of it as a universal tale about survival and perseverance and the human spirit.” (David’s wall-sized chalkboard outline for his cinematic siege includes the scene notation: “[PREGNANT OVERTONES].”)

Lurie likes his crosscut, both in image and sound: shitkicker music sounds against cliche classical; hammer-and-nail pounding versus fingers attacking a keyboard, A sexual assault is intercut with the stalking of a buck in the fog-coiled forest. It’s all preamble. No bear trap or nail gun will rest tonight. Cinematographer Alik Sakharov’s credits include thirty-eight episodes of “The Sopranos,” nine of “Rome” and four of “Game of Thrones”; the climactic onslaught’s half hour of dark digital slurry is consistent in its brutish murk.  With Dominic Purcell, Rhys Coiro, Billy Lush, Laz Alonso, Willa Holland, Walton Goggins, Anson Mount. 110m. (Ray Pride)