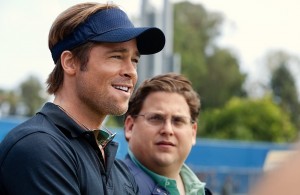 Another book about American business lends itself to a compelling drama centered on a maverick. This fact-based look at winning is a truly calculated case of “inside baseball.” “Moneyball” is based on the 2003 book by Michael Lewis titled “Moneyball: The Art of Winning an Unfair Game.” The resemblance to “The Social Network,” based on the 2009 book “The Accidental Billionaires,” makes sense since Aaron Sorkin is credited with collaborating on both screenplays. (Steven Zaillian shares screenwriter credit.) Unlike the against-the-grain entrepreneur in “The Social Network,” modelled after Facebook’s Mark Zuckerberg, “Moneyball” supplies a rooting interest in the more likeable Billy Beane (Brad Pitt). This general manager of the Oakland Athletics, who was a pro washout in the 1980s, acts like he’s in a western. When bigger clubs buy up his best players, he buys out the underpaid, underappreciated Peter Brand (Jonah Hill) from the Cleveland Indians. His new sidekick majored in economics at Yale and hangs a Plato poster over his bed. Old-time intuitive recruiters have no use for this number cruncher getting his chance to test his formula. The A’s start hiring cheaper C-scale players who nonetheless get on base, the first step to winning games. Director Bennett Miller (“Capote”) characterizes an all-American manager as a hero armed with decision-making trees. The corporate and competitive dynamics are revelatory for  viewers who could not care less about pro ball. With Philip Seymour Hoffman, Robin Wright, Chris Pratt, Stephen Bishop. 133m. (Bill Stamets)