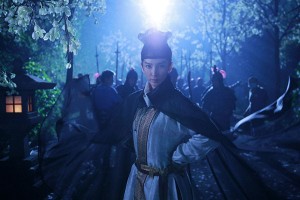 “Detective Dee and the Mystery of the Phantom Flame” opens Friday at Landmark Century.